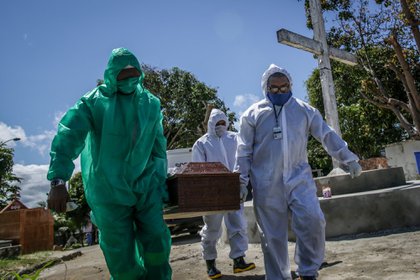 (Bloomberg) -- Severe oxygen shortages at hospitals in Brazil’s Amazon prompted local authorities to impose a curfew and some patients are being airlifted to other states to deal with the onslaught of a second coronavirus wave.

The state of Amazonas set a 7 p.m. curfew and suspended public transportation in roads and rivers, governor Wilson Lima said on Thursday.

“This is the most critical time of the pandemic. It’s unprecedented in the state of Amazonas,” Lima said at a press conference. “We are having a very difficult time getting supplies, especially oxygen.”

Cases have increased “substantially” in the state and especially in the capital, officials said. That resulted in a massive jump in demand for oxygen, which is now more than double what was seen at the first peak of the crisis. The sudden advance has left both private and public hospitals scrambling to open new hospital beds and find supplies.

Health Minister Eduardo Pazuello visited the state earlier this week to try to help ease the crisis. On Thursday, he said Manaus would be first in line to get vaccines.

“The Federal government is failing in this case as it failed in everything related to the pandemic,” Miguel Nicolelis, a neuroscientist who’s helping hard-hit northeastern states coordinate their response, said in an interview. “Air space should already be shut and lockdowns implemented to avoid more contagion.”

Bolsonaro Mistrusts Covid Vaccines and Brazil Is Falling Behind

Manaus, which has the only ICU beds available in the vast state of Amazonas, already struggled in the first wave of the pandemic. Back in April, videos in local media showed patients alongside body bags from suspected Covid-19 cases waiting to be removed. At the time, the virus was so prevalent that scientists mulled whether the region had achieved herd immunity.

Amazonas has recorded almost 220,000 confirmed coronavirus cases and 5,879 deaths. The mortality rate per 100,000 people is 141.8, compared to 98 nationwide. The reproduction factor -- the so-called R rate -- is at 1.3, which indicates that the pace of virus transmission is increasing rapidly.

Much like the U.S. and Europe, Brazil has seen a resurgence in the past few weeks. At 55,626, the seven day moving average of cases is at a record, according to data from local health secretaries. The moving average of deaths is at 1,044, the highest since August. Brazil has the second-most fatalities and third-most infections globally.

Researchers recently identified a new strain of the virus in travelers coming from the Amazon. Fiocruz institute said the variant is probably recent, appearing between December 2020 and this month. “If the mutations give it any advantage in transmission, we should expect the variant to become more frequent in Brazil and around the world over the next few months,” the researchers said.

“We still know very little about the new variant detected in Amazonas, but considering that the state’s health system is collapsing and the virus is out of control, it is likely going to spread to the rest of the country very fast,” Nicolelis said.