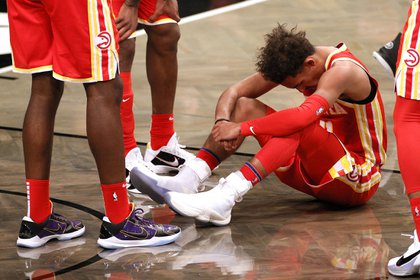 NEW YORK, NEW YORK - DECEMBER 30: Trae Young #11 of the Atlanta Hawks reacts during the second half against the Brooklyn Nets at Barclays Center on December 30, 2020 in the Brooklyn borough of New York City. The Nets won 145-141. NOTE TO USER: User expressly acknowledges and agrees that, by downloading and/or using this Photograph, user is consenting to the terms and conditions of the Getty Images License Agreement. (Photo by Sarah Stier/Getty Images)

(Bloomberg) -- The National Basketball Association is struggling to keep its games on schedule as Covid-19 contact tracing forces more players to the sideline, leaving teams without enough people on their rosters.

The league postponed its seventh game of the season, which started shortly before Christmas, with Wednesday’s matchup between the Atlanta Hawks and Phoenix Suns called off.

After executing a successful “bubble” to finish the previous season at Walt Disney World in Florida, the league has run into issues in the new season, attempting to play in home markets that struggle to contain the coronavirus.

The Boston Celtics have had their last three games postponed, saying in an injury report Sunday that seven players were out because of the league’s rules.

As games continue to get delayed, the league implemented additional measures Tuesday to try and quell the surge in players forced out. Measures include requiring players and staff to remain at their residence except to attend team-related activities, capping pre-game locker room meetings at 10 minutes, and limiting interactions before and after games to elbow- or fist-bumps.

“They can’t tell me I have to stay in a room 24/7. If it’s that serious, then maybe we shouldn’t be playing,” he said. “No one’s going to be able to just cancel their whole life for this game.”