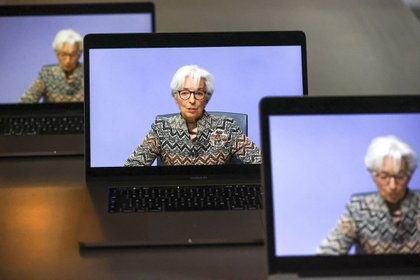 Christine Lagarde, president of the European Central Bank (ECB), speaks during a live stream video virtual rate decision news conference, in an arranged photograph, in Hanau, Germany, on Thursday, Dec. 10, 2020. The ECB is expected to deliver another round of monetary stimulus at its meeting Thursday to help economies exit the pandemic crisis, while European Union leaders meet in Brussels and will likely approve a landmark stimulus package.

The ECB chief stressed that many of the uncertainties that previously clouded the outlook have now been cleared, including U.S. elections, the Brexit trade deal with the U.K., and the start of vaccinations.

“We start on a more positive basis than some would like to look at,” she said in an online event organized by Reuters, while adding that continued monetary and fiscal support will still be needed.

The euro-area economy is on track to shrink again at the start of 2021 as the resurgent pandemic plunges the region into a double-dip recession. Numerous economists have downgraded forecasts in recent days to account for renewed restrictions, which in some places are tougher than ever.

To support the economy through turbulent times, Lagarde’s central bank extended out its bond-buying program to March 2022 when it last updated stimulus in December. Policy makers meet to set policy next week.

The president also said policy makers will be “extremely attentive” to the rise of the euro against the dollar, which pushes down on inflation by cutting import costs.