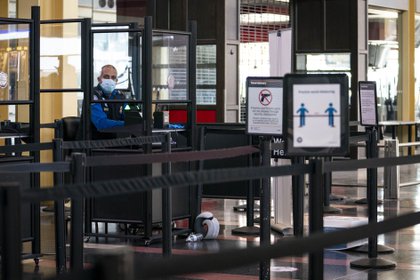 A Transportation Security Administration agent behind a barrier at Ronald Reagan National Airport in Arlington, Virginia.

(Bloomberg) -- The U.S. will require proof of a negative Covid-19 test before allowing visitors to fly into the country from other nations, in an effort to help airlines regain at least some of their most lucrative international travel.

The Centers for Disease Control and Prevention on Tuesday said it approved the new anti-pandemic measure that will take effect on Jan. 26.

It requires travelers receive a test within three days before leaving for the U.S. and provide written documentation of a negative result. Airlines must confirm the information before allowing passengers to board, the CDC said in the statement.

“Testing does not eliminate all risk,” CDC Director Robert Redfield said, “but when combined with a period of staying at home and everyday precautions like wearing masks and social distancing, it can make travel safer, healthier, and more responsible by reducing spread on planes, in airports, and at destinations.”

The rules build on a federal mandate beginning Dec. 28 requiring negative tests for passengers flying to the U.S. from the U.K., following the discovery of a new variant of the disease that spreads more rapidly. Comprehensive testing would potentially help revive demand for trips between the U.S. and other nations, which have been stalled at less than a quarter of 2019 levels because of virus fears and government travel restrictions.

The new standard would apparently replace a broader ban on entry for most non-U.S. citizens traveling from 28 European nations that was imposed by the Department of Homeland Security after a presidential proclamation on March 11. The DHS directed questions on the matter to CDC.

“We believe a well-planned program focused on increasing testing of travelers to the United States will further these objectives in a much more effective way than the blanket travel restrictions currently in place,” the group known as A4A said.

Some of the most lucrative airline routes to Europe have been among the most severely hit by the pandemic. Passengers aboard U.S. carriers on trans-Atlantic flights fell more than 85% in the past week compared to the same period a year ago, according to A4A data.

Canada said Dec. 30 that it would require air travelers entering the country to obtain a negative test.