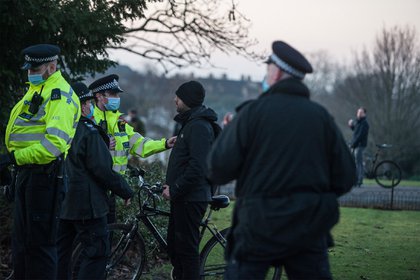 LONDON, ENGLAND - JANUARY 9: Police detain several anti lockdown protestors in Brockwell park Brixton whom had initially gathered near Windrush square before heading into the park on January 9, 2021 in London, England. Chief Medical Officer Chris Whitty has filmed an advert for HM Government warning that people should stay home as the COVID-19 virus is spreading across the country. Despite these warnings the protest group StandUpX are demonstrating against coronavirus lockdown measures and vaccines. ( Photo by Guy Smallman/Getty Images)

(Bloomberg) -- The U.K. government urgently called on the public to follow lockdown rules as a continuing surge in coronavirus infections pushed the number of patients on ventilators to its highest level since April.

Home Secretary Priti Patel warned police are cracking down on those “putting the health of the nation at risk by not following the rules,” as she raised the prospect of a tougher lockdown in England in the coming weeks.

More police officers are being sent out on dedicated patrols and they have been told to issue fines more quickly where people are “clearly breaching regulations,” Martin Hewitt, chairman of the National Police Chiefs Council, told a press conference alongside Patel on Tuesday evening.

They were speaking as the latest official U.K. data showed there were 3,363 people in mechanical ventilation beds, the most since the pandemic began. There were also 1,243 new deaths from Covid-19 within 28 days of a positive test, and 35,075 people hospitalized with the disease.

Vin Diwakar, the National Health Service’s medical director for London, said the pandemic is the “biggest health emergency this country has faced since the Second World War“ as he warned people to continue to take the pandemic seriously.

Coronavirus is a “horrible disease that leaves so many, including young people, breathless and gasping for life,” he told reporters. If infections keep rising, the NHS in the capital and beyond will struggle to treat other conditions, he said.

Some non-Covid patients are already being treated at the Nightingale overspill hospital in east London and a point will soon be reached where “more and more patients from London will need to be transferred elsewhere,” he said.

England is currently in its third national lockdown, with the public ordered to stay at home and schools shut to most pupils. But ministers have come under pressure to explain why some places, such as garden centers and nurseries for pre-school children, can remain open during a time of crisis -- and why many people are still allowed to go to work.

Patel insisted the message is clear and the rules are “not more relaxed” than the first lockdown last spring. She didn’t rule out stricter lockdown measures in the coming weeks if cases continue to soar. “These issues are live within government,” she said.

Prime Minister Boris Johnson was criticized this week for appearing to bend the lockdown rules himself, by cycling at the Olympic Park in east London, 7 miles from his Westminster home.

Government guidelines say outdoor exercise should be limited and people should stay in their local area. Asked about this on Tuesday, Patel said people should not socialize and they should stay away from others --- “which is clearly what the prime minister did when he was taking his daily exercise.”

Hewitt acknowledged mistakes have been made by police enforcing the rules because it is such an unprecedented situation, but he said there are “still too many people choosing not to comply” with the regulations and they are “endangering us all.”

He listed some examples, including a boat party in Hertfordshire where more than 40 people had paid 30 pounds ($41) each for tickets, and a minibus full of people from different households traveling from Cheltenham, southwest England, to Wales for a walk.