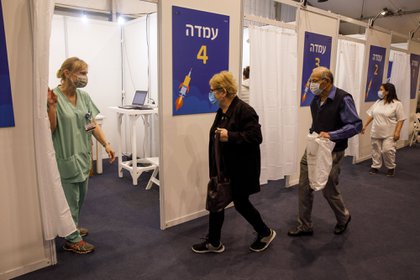 An elderly couple enter a cubicle inside a Covid-19 mass vaccination center at Rabin Square in Tel Aviv, Israel, on Monday, Jan. 4, 2020. Israel plans to vaccinate 70% to 80% of its population by April or May, Health Minister Yuli Edelstein said on Monday, pressing ahead with a program that promises an earlier-than-forecast economic recovery.

(Bloomberg) -- With Israel on track to have all of its adult population vaccinated against coronavirus by the end of March, a Barclays Plc analyst expects banking shares to lead a broad re-rating within the country’s stock market.

“We see Israeli banks best positioned to rerate”, Tavy Rosner wrote in a note on Tuesday, adding that their excess capital has made them resilient during the pandemic, though their loan growth has been offset by record provisions. This curb may soon disappear.

If the vaccination target is met, “we are likely to see the banks post significant loan loss provision recovery in the second half of 2021,” he said.

Rosner expects the economy to fully reopen over the coming months, highlighting a central bank forecast of 6.3% gross domestic product growth in 2021 under the rapid vaccination scenario. The nation has so far vaccinated 21% of its population, while sizable parts of its economy are shut down in the latest of three lockdowns.

Worldwide, banking shares have been rising amid prospects of higher spending in the U.S. under a Joe Biden presidency. In Israel, they trade at a discount to European and American lenders when considering price-to-earnings, Rosner said, highlighting that he expects their dividend payouts to resume in the second half.

The pandemic also boosted the use of digital channels, which Rosner expects to help the banks’ efforts to become more efficient.

Barclays estimates a 25% upside potential for Bank Leumi Le-Israel BM shares and 14% for Bank Hapoalim BM. It maintains overweight ratings on the country’s two largest banks and further raised its already Street-high price targets for both stocks on Tuesday.

Read more: Why Israel Was the Perfect Test Case for Vaccines: Zev Chafets