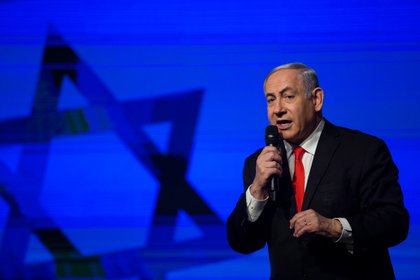 (Bloomberg) -- Israel is already plotting how to derail one of Joe Biden’s signature foreign-policy promises.

The high-profile campaign that Prime Minister Benjamin Netanyahu waged against the Obama administration’s nuclear deal with Iran failed to block the 2015 agreement. Officials are now weighing whether that sort of public crusade or behind-the-scenes engagement will be the most effective strategy with Biden, a senior Israeli official said, emphasizing that no decision has been made.

Israel will start by sending a stream of envoys on visits to Washington, the official said, requesting anonymity to discuss private deliberations. It’s stated publicly that it doesn’t want the U.S. to abandon sanctions on the Islamic Republic without a new deal, and that a tougher stance should be taken toward its nuclear project, ballistic missile program and regional proxy forces.

That strategy runs against the Biden team’s willingness to re-enter the deal, then negotiate an expansion of its terms. It’s conditioned on Iran’s returning to compliance with the accord, whose limits it breached after President Donald Trump pulled the U.S. out of the agreement in 2018.

“It seems to me that we have to learn some lessons, first of all not to give up the sanctions five minutes before we start the negotiations,” Zohar Palti, head of the political-military bureau in Israel’s Defense Ministry, said at a conference last month.

Iran says it’ll welcome the U.S. back to the accord but won’t renegotiate. It’s also demanded $70 billion in compensation for lost oil revenue as a result of U.S. sanctions.

Israel also has a higher-risk card up its sleeve: the potential to upend diplomatic efforts through covert operations against Iran. Tehran blames Israel for the assassination of a top Iranian nuclear scientist in November, and its foreign minister this month accused Netanyahu’s government of trying to goad the U.S. into war in an attempt to derail Biden’s efforts to revive the deal.

Netanyahu has been open about his intention to thwart renewed U.S. participation. In a rare public split, he rebuked his envoy to Germany for supporting Berlin’s push to expand the deal.

“There should be no return to the Iran nuclear agreement of 2015 -- a deal which is flawed to its foundations,” Netanyahu said.

Facing another round of national elections in March, Netanyahu is campaigning on his foreign policy and security record and highlighting his staunch opposition to the Iran accord, a consensus position in Israel that likely will hold no matter who wins the vote. That included a controversial address to the U.S. Congress in 2015, where Netanyahu tried to persuade lawmakers to oppose Obama’s Iran policies. The speech was made without notifying the White House, a breach of diplomatic protocol viewed as an insult to the then-president.

Biden, who was vice president at the time, will seek a constructive relationship with Netanyahu and try to avoid public disagreements, according to a former senior U.S. official in close contact with the Biden team. But general policy isn’t up for debate, the person said.

Immediate changes to Iran policy under the new U.S. administration could include loosening access to humanitarian aid and making its trade mechanism with Europe work better, the former official added, asking not to be named because he wasn’t authorized to speak for the president-elect.

“There won’t be a honeymoon between Biden and Netanyahu, but there doesn’t need to be the kind of soap opera that characterized the relationship under Obama,” said Aaron David Miller, senior fellow at the Carnegie Endowment for International Peace and a former Mideast official at the State Department.