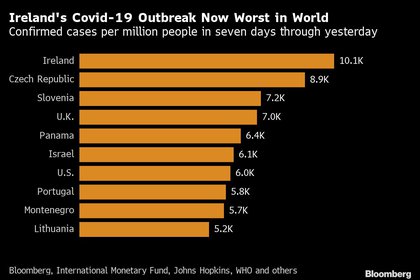 (Bloomberg) -- The number of Irish coronavirus patients in intensive care reached a record Tuesday, as the hospital system nears capacity amid one of the worst outbreaks in the globe.

Some 158 confirmed Covid-19 cases are intensive care, according to the health ministry, beating a record set in April. Overall, 1,620 patients are in hospital, almost double last year’s high. The nation is in the teeth of a new wave of the pandemic, and now has the worst instance of the virus per million people globally, according to data compiled by Bloomberg.

Hospitalizations have tripled since the start of the year, while intensive care beds are about 89% full even as the health system ramps up so-called surge capacity to bring more beds online. ICU is full in as many as 13 hospitals in the country, which has among the fewest critical care beds per capita in Europe.

The government relaxed restrictions last month, a tactic that may have contributed to one of the world’s highest contagion rates amid increasing evidence of the U.K. variant in Ireland in recent days.While there are signs that government restrictions to contain the virus are starting to have an impact, the situation in hospitals will continue to deteriorate, Irish Deputy Prime Minister Leo Varadkar told RTE Radio Tuesday.

“It will be a long time before hospitals recover and the situation there has yet to peak,” he added.