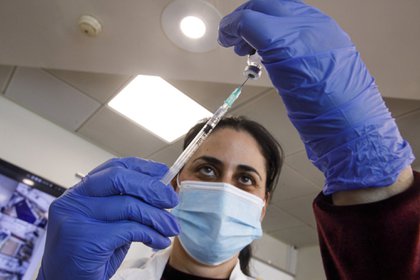 A nurse draws the the Pfizer-BioNTech Covid-19 vaccine from a vial at the Wolfson medical center in Holon, Israel, on Sunday, Dec. 20, 2020. Israelis returning from the U.K., Denmark, and South Africa will be sent to isolation in government-run quarantine sites to help prevent a mutant strain of coronavirus from entering the country.

(Bloomberg Opinion) -- In just 21 days, Israel had inoculated 20% of its 9.3 million citizens and permanent residents and, even more significantly, 70% of its initial target group — medical personnel and people over 60 of age.

These are astounding figures. The U.S. has managed to inoculate about 2% of its population. Germany, Italy and France have yet to reach 1% percent.

After receiving his own second dose of the vaccine, Prime Minister Benjamin Netanyahu announced that a massive airlift of vaccines would begin, allowing everyone 16 and over to be immunized within two months. Israel, he said, “will be the first country in the world to defeat the virus.” Conveniently for Netanyahu, that victory coincides with the Israeli election scheduled for March 23.

Having failed to control the virus’s spread and enforce successive lockdowns, Netanyahu framed the vaccination program as his personal achievement. He bragged that the vaccine is being supplied as a result of 17 telephone conversations he conducted with his dear friend, Albert Bourla, the CEO of Pfizer, Inc., the company providing the lion’s share of Israel’s vaccine.

Netanyahu’s foresight and persistence certainly deserves credit. But Bourla also saw an opportunity as he recognized that Israel’s uniquely personalized and fully digitized community health system could provide near real-time information on the vaccine and its efficacy.

All Israelis are insured by one of four national health maintenance organizations (HMOs), whose clinics and hospitals are spread throughout the country. They are competitive, but the price of membership, co-payments and treatments are regulated and uniform. So is the subsidized “basket” of medication, procedures and treatments. These are decided by a national board of experts. Medication is bought by the government and centrally distributed via a single company. All medical records are online, available to hospitals, doctors and the Ministry of Health.

This makes Israel especially attractive to Pfizer and other vaccine producers. HMOs know who has been vaccinated and in what order of priority. They know who has returned for a booster shot and who has opted out. Israel knows the ages, medical conditions and other demographic information of a heterogeneous population. And all this data is held by the Ministry of Health. It is a treasure for testing efficacy of the vaccine among various groups and the relative amount of vaccine needed for efficacy. Israel will be likely to be the first country to know the level of coverage needed to achieve herd immunity.

Distribution has been a model of efficiency. Vaccinations happen seven days a week in most places and even late at night. While it is a civilian operation, the army is vaccinating its own soldiers and helping with tracking and tracing infection and some logistics.

Israel’s government doesn’t publish the number of vaccines it has received or what supply is coming. We know that 2 million people have received a dose of the Pfizer vaccine and will receive their second dose starting this week. According to Netanyahu, an unspecified “millions more” are in the pipeline. Last week, Moderna, whose chief medical officer is an Israeli, sent an initial shipment of 100,000 doses. Israel is also working on a homemade vaccine that could be ready by the summer.

If things go according to plan, Israel will reach full vaccination within a couple of months, and be left with a surplus. Other countries, including Cyprus and Denmark, have already expressed interest. So far, however, official policy is that Israeli citizens come first.

Among those citizens are roughly 2 million Arab-Israelis who, for reasons ranging from a lack of trust in the government to a disbelief in the seriousness of the virus, have lagged far behind the Jewish population in getting inoculated. Authorities, starting with the prime minister, have launched an aggressive public information campaign to encourage vaccination.

Their logic is compelling. “There is absolutely no doubt we have to inoculate the Palestinians in the West Bank and East Jerusalem. It is a moral and a legal obligation,” says Arie Bass, a former senior member of the Ethics Committee of the Israel Medical Association. “Israel should pay for it and provide it under the same criteria and priorities it applies to its own citizens.”

Ethics and humanitarian concerns aside, it makes sense to vaccinate the West Bank, given tens of thousands of its residents commute to jobs in Israel and mingle with the general population. If Israel finds it doesn’t wind up with a surplus,  Netanyahu should make an 18th call to Bourla to get the vaccine for the West Bank.

It detracts from his credit in vaccinating his own citizens that Prime Minister Netanyahu has ignored this issue. Some of his hardline supporters oppose giving aid and comfort to a people they regards as the enemy. But Netanyahu should be magnanimous in victory. It will offer him an opportunity to rehabilitate his image in post-Trump Washington. Even more important, it is a chance for Israel to save lives, and perhaps change hearts and minds, in its nearest, and most distant, neighbor.

This column does not necessarily reflect the opinion of the editorial board or Bloomberg LP and its owners.

Zev Chafets is a journalist and author of 14 books. He was a senior aide to Israeli Prime Minister Menachem Begin and the founding managing editor of the Jerusalem Report Magazine.