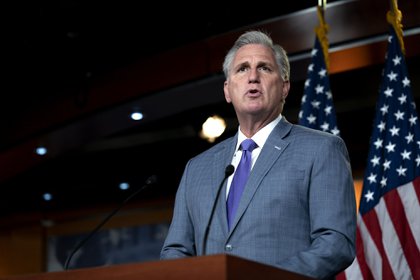 House Minority Leader Kevin McCarthy, a Republican from California, speaks during a news conference at the U.S. Capitol in Washington, D.C., U.S., on Thursday, Dec. 3, 2020. House Speaker Pelosi and Senate Democratic leader Schumer yesterday threw their support behind using a $908 billion bipartisan stimulus proposal as the foundation for a new round of negotiations with congressional Republicans and the White House.

(Bloomberg) -- House Republican Leader Kevin McCarthy on Monday told colleagues he remains opposed to impeaching President Donald Trump in connection with last week’s riot at the U.S. Capitol, but is floating other responses, including censure of the president.

“Personally, I continue to believe that an impeachment at this time would have the opposite effect of bringing our country together when we need to get America back on a path towards unity and civility,” McCarthy wrote in a letter to rank and file House Republicans.

In a private call with the Republican conference later Wednesday, McCarthy did say he believed Trump bore some responsibility for the events, but did not elaborate, according to a person on the call.

In the letter, he listed as responses to last week’s siege of the Capitol: A censure resolution by the House; a bipartisan commission to look into the attack and what led to it; “reforming the Electoral Count Act of 1887”; and “legislation to Promote Voter Confidence in Future Federal Elections.”

The letter was circulated just before House Republicans were to talk in the private conference call. It also came just hours after House Democrats introduced an impeachment resolution accusing Trump of “incitement of an insurrection” over the attack on the Capitol. Majority Leader Steny Hoyer said the House would consider the resolution and its articles of impeachment Wednesday.

McCarthy, who rarely has criticized or clashed with Trump, wrote that, “notwithstanding the speaker’s push towards impeachment, I have heard from members across our conference who have raised at least four potential avenues available to the House to ensure that the events of Jan. 6 are rightfully denounced and prevented from occurring in the future.”

“This past week has been extremely difficult for our conference and for our nation. We mourn the tragic loss of life, especially the lives of Officer Brian Sicknick and Officer Howard Liebengood of the U.S. Capitol Police,” McCarthy added in the letter.

He said that House Republicans have been taking time “to process the events of that day.” He cited zip ties that were found “were found on staff desks in my office. Windows were smashed in. Property was stolen.”

“Those images will never leave us — and I thank our men and women in law enforcement who continue to protect us and are working to bring the sick individuals who perpetrated these attacks to justice,” writes McCarthy.

At the same time, McCarthy writes that while he sees an even deeper sense of service and clarity of purpose by House Republicans, “both for our shared principles and for the future of our nation.”