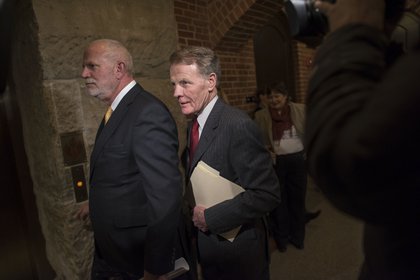 (Bloomberg) -- Illinois House Speaker Michael Madigan, the longest serving head of a state house in the U.S., on Monday announced that he is suspending his campaign for re-election.

“This is not a withdrawal,” Madigan said in a statement emailed by a spokesman. “As I have said many times in the past, I have always put the best interest of the House Democratic Caucus and our members first. The House Democratic Caucus can work to find someone, other than me, to get 60 votes for Speaker.”Madigan, a power broker in the state for at least the last four decades, has seen opposition for his re-election to a post he’s held for all but two years since 1983 grow in recent months. As speculation mounted that he would not recieve the 60 votes need for re-election, new candidates have thrown their hats into the ring. Illinois House Democrats are expected to vote on a leader later this week.

Madigan has became entangled in a federal bribery probe that led Commonwealth Edison, Illinois’s largest electricity utility, to agree to pay more than $200 million and its former chief executive along with three of its lobbyists to be indicted.

Madigan has denied wrongdoing and has not been charged. Still, Illinois Governor J.B. Pritzker has said repeatedly that a higher bar is set for those who hold public office and if Madigan can’t fully answer all questions from the public, he should resign.