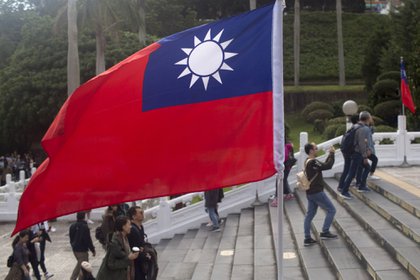 (Bloomberg) -- China’s state-run media called for retaliation after the Trump administration removed decades-old restrictions on interactions with Taiwan officials just days before President-elect Joe Biden takes office, one of its biggest moves yet to reshape U.S. ties with the Asian democracy.

The Communist Party-backed Global Times warned that Secretary of State Michael Pompeo’s moves were pushing the world’s biggest countries toward conflict. Hu Xijin, the newspaper’s editor-in-chief, said on Weibo China had a “precious window of opportunity for mainland China to teach a heavy lesson to the ‘Taiwan independence’ forces” and re-establish “strategic leverage” in the Taiwan Strait.

“While Pompeo tries to cross Beijing’s red line on national sovereignty and territorial integrity, he should not expect that China will sit back and do nothing,” said a commentary published in the official Xinhua News Agency on Sunday. “Those political clowns will be punished for what they have done to harm China’s core interests.”

China’s Foreign Ministry, which opposes official U.S.-Taiwan interactions, has yet to comment on Pompeo’s moves. It has condemned the trip this week by Kelly Craft, who will become the first U.S. ambassador to the United Nations to visit Taiwan since it was excluded from the global body in 1971, calling her visit “a breach of the One-China principle” and accusing Pompeo of “staging a final show of madness” to “sabotage China-U.S. relations.”

The U.S. guidelines on meetings with Taiwanese officials, which are updated periodically, were put in place after its recognition of China in 1979 to distinguish interactions with Taiwan from those with official diplomatic partners. They required written permission from the State Department for diplomats and military personnel above a certain rank to visit Taiwan, and restricted the venues where meetings with Taiwan representatives could take place.

“For several decades the State Department has created complex internal restrictions to regulate our diplomats, service members, and other officials’ interactions with their Taiwanese counterparts,” Pompeo said in a statement Saturday in Washington. “The United States government took these actions unilaterally, in an attempt to appease the Communist regime in Beijing. No more.”

The announcement was the latest in a series of moves by the Trump administration to increase ties with Taiwan. Before taking office in January 2017, President Donald Trump accepted a telephone call from Taiwan’s President Tsai Ing-wen and said his support for the “One China” policy was contingent on getting better trade deals. Although he later endorsed the policy that has governed U.S.-China ties for decades, Trump increased arms sales and sent the most senior officials in decades to visit Taipei.

“While the implications of the announcement are not yet clear, it seems the intent is to nudge unofficial U.S.-Taiwan relations toward something more akin to official ties,” said Maggie Lewis, a law professor at Seton Hall Law School who has written extensively on Taiwan and China.

Taiwan Walks Tightrope Between China and Not China

Taiwan’s Minister of Foreign Affairs Joseph Wu said in a tweet that he was grateful to Pompeo for “lifting restrictions unnecessarily limiting our engagements.”

“The closer partnership between Taiwan and the U.S. is firmly based on our shared values, common interests and unshakable belief in freedom and democracy,” the minister said.

Beijing’s “One China” principle states that Taiwan and China are part of the same China. While the U.S. recognizes that the government of the People’s Republic of China is the only legitimate government of China, it only acknowledges that the PRC claims Taiwan is a part of China. Taiwan’s government views the island as a de-facto independent, sovereign nation.

Why Trump Raising Doubts About ‘One China’ Is a Big Deal

“Best case, the Biden Administration sees this as a blank slate and starts an internal process to develop what the ideal U.S.-Taiwan engagement structure and process looks like, consistent with the unofficial relationship, shared democratic values, and the benefits the bilateral relationship brings,” said Drew Thompson, a former U.S. Department of Defense official responsible for Taiwan policy.

The announcement by Pompeo is one of a number the administration has launched or strengthened in the final days of its term, including an initiative to punish companies with close ties to the Chinese military. He also issued a joint statement on Saturday with the foreign ministers of the U.K., Canada and Australia expressing “serious concern” about the arrest of 55 activists and politicians in Hong Kong last week.

Hong Kong’s government later rejected that criticism. China has repeatedly said no other nations have the right to interfere in its internal affairs, including in Hong Kong.

Hong Kong’s National Security Law is a breach of the Sino-British Joint Declaration and undermines the “one country, two systems” framework, according to the statement. The legislation “has curtailed the rights and freedoms of the people of Hong Kong. It is clear that the National Security Law is being used to eliminate dissent and opposing political views,” the governments said.