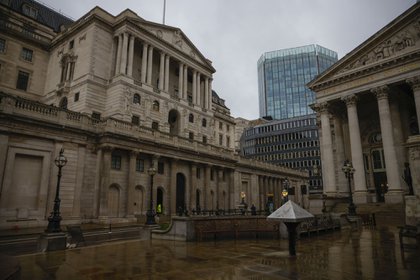 The Bank of England in the square mile financial district of the City of London. Photographer: Jason Alden/Bloomberg

(Bloomberg) -- The London operations of global banks are getting more scrutiny from the Bank of England as they move hundreds of billions of euros of business out of Britain after Brexit.

The BOE proposed Monday to take a closer look at the banks’ arrangements for transferring business and booking trades in Frankfurt, Paris and across the world. It will also examine firms relying more on U.K. branches after losing “passporting” rights to trade in Britain.

“These evolving firm structures have led to an associated increase in intragroup flows of business and changes in the international footprint of many firms, including in relation to booking arrangements,” the BOE said.

The central bank warned that a few banks with hubs in London are providing “substantially less information” to regulators than peers and its reviews have uncovered problems at some firms’ oversight of front-office business.

About 250 banks including Deutsche Bank AG and JPMorgan Chase & Co. have bases in London. Brexit took effect on Jan. 1, leaving the City of London to confront an exodus of cross-border business back into the EU’s single market. Global banks are moving thousands of employees to hubs in Frankfurt, Paris and Amsterdam, while London has lost nearly $8 billion in stock-trading to the bloc.