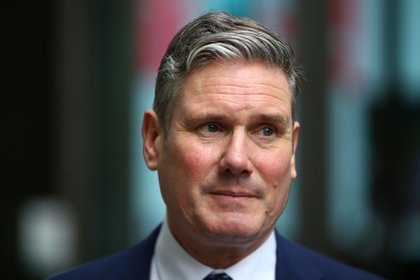 (Bloomberg) -- Britain’s opposition leader, Keir Starmer, said there’s no case for the U.K. to seek to rejoin the European Union and that his Labour Party won’t try to reintroduce the freedom of movement that was ended by Brexit.

Speaking to the BBC on Sunday, Starmer reiterated his criticism of Prime Minister Boris Johnson’s “thin” trade agreement with the bloc and said his party voted for it to prevent the chaos of a no-deal divorce. A future Labour government would have to work within the terms of the treaty rather than try to reopen negotiations with the EU, he said.

The comments reflect the juggling act facing Starmer, who campaigned for the U.K. to stay in the bloc and as Labour’s Brexit spokesman pledged to defend key aspects of EU membership including freedom of movement. But Labour lost heavily in the 2019 general election to Johnson’s Conservatives, who campaigned under a slogan to “get Brexit done” that saw the Tories win many seats in northern England that have traditionally voted Labour.

“I don’t think that there’s scope for major renegotiation,” Starmer told the BBC when asked about Labour’s support for Johnson’s deal. “It’s thin, it’s not what was promised, but whether we like it or not that is going to be the treaty that an incoming Labour government inherits and has to make work.”

Starmer also reiterated his opposition to another referendum on Scottish independence, saying a “divisive” vote would undermine efforts to tackle the pandemic. The Labour leader has previously called for a constitutional commission to consider how to revamp devolution in the U.K.

The issue of Scottish independence is set to be a major theme in British politics this year as the country’s biggest parties try to arrest rising support for ending the three-centuries-old United Kingdom.

Polls show the Scottish National Party is on course to win an outright majority in local elections this year. Nicola Sturgeon, who leads the SNP and the government in Edinburgh, says she wants another referendum early in the next Scottish Parliament, though Johnson has refused to sanction one.