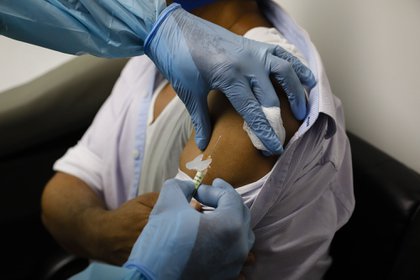 A health worker injects a person during clinical trials for a Covid-19 vaccine at Research Centers of America in Hollywood, Florida, U.S., on Wednesday, Sept. 9, 2020. Drugmakers racing to produce Covid-19 vaccines pledged to avoid shortcuts on science as they face pressure to rush a shot to market.

(Bloomberg) -- Pfizer Inc. is pushing back by months a late-stage study on its lead antiviral treatment for Covid-19 because it couldn’t enroll enough patients at a time when infections are surging.

The giant U.S. drugmaker has been praised for ushering in a successful vaccine in just 10 months, a major feat given vaccines typical take years to develop. But while vaccines are studied in healthy volunteers from the community at large, antiviral treatments must be measured in sick patients, typically in early stages of the disease.

That’s posing a logistical hurdle for Pfizer. Many hospitals, seeing a record rise in U.S. cases, are prioritizing people with severe disease and struggling to put resources into trials, said Annaliesa Anderson, chief scientific officer of the bacterial vaccines unit. Pfizer also found patients were reluctant to join the small safety study without assurances that their condition would improve by receiving the infusion.

“You’re in a pandemic, people are desperate for treatments,” Anderson, who leads the company’s Covid-19 antiviral program, said in an interview. “We didn’t expect the study to be so slow.”

The late-stage study on PF-07304814, the company’s lead antiviral treatment, was expected to start in late 2020 or early this year. That’s now likely pushed back to the second quarter of the year, Anderson said.

When Pfizer began enrolling patients in September, the inclusion criteria were perhaps too narrow, Anderson said. The company has now expanded the criteria. It also changed the duration of the intravenous infusion to increase the probability of clinical benefit, Anderson said, thus encouraging more patients to enroll, and launched a separate safety study in healthy patients.

Pfizer still hopes to have a late-stage data readout of the IV treatment before the end of the year, according to the company.

Though it’s taking Pfizer longer to develop antivirals than its mRNA vaccine, Anderson said she sees demand for the therapies persisting long into the future.

Covid-19 won’t be eradicated quickly, she said. And the two drugs Pfizer is in the process of developing -- the intravenous PF-07304814 antiviral and a pill expected to soon enter Phase 1 trials -- have the potential to treat other coronaviruses that may emerge, whether they are mutations of Covid-19, or entirely new viruses, according to Anderson.

“That’s my greatest concern,” she said. “We need something that will work against all coronaviruses.”

Pfizer’s antiviral program harkens back to another epidemic.

In 2003, the New York-based company launched preclinical work on an antiviral therapy to quell the outbreak of Severe Acute Respiratory Syndrome, known as SARS -- another coronavirus that swept through China and other countries, eventually killing more than 800 people around the world.

But as SARS infections tapered off, Pfizer was unable to test the compound’s efficacy. Research was ultimately discontinued.

Seventeen years later, in January 2020, Anderson, along with colleagues who had been at Pfizer since the SARS epidemic and remembered the compound, revived the program as the novel coronavirus spread.

The effort to build an antiviral-focused team came weeks before Pfizer and BioNTech SE, a German company focused on a new technology known as messenger RNA, would launch a partnership to develop a vaccine to combat the virus.

“We went from having a skeleton group to literally overnight having to call back all the staff and begin working the antiviral program,” Anderson said.

Both of Pfizer’s experimental Covid-19 drugs work by inhibiting an enzyme, known as protease, that the virus needs to replicate. By slowing down the virus replication, it has the potential to reduce Covid-19 symptoms and the risk of disease progression.

Meanwhile, Pfizer’s oral antiviral compound is likely to enter Phase 1 clinical trials “within the next few months,” Anderson said. A pill has the potential to be used outside the hospitalized setting with people who have just discovered they’ve contracted the virus.