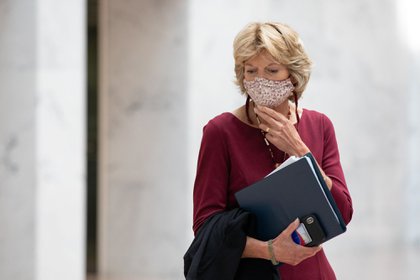 Senator Lisa Murkowski, a Republican from Alaska, wears a protective mask at the U.S. Capitol in Washington, D.C., U.S., on Tuesday, Sept. 22, 2020. Senate Republicans are moving quickly to set their strategy for confirming President Trump's Supreme Court nominee, with the senators focusing on whether they can move fast enough to get it done before Election Day in six weeks.

(Bloomberg) -- Senator Lisa Murkowski of Alaska said President Donald Trump should resign after inciting a riot at the Capitol, and she questioned her future as a Republican if the party doesn’t break with the outgoing president.

“I want him to resign. I want him out,“ Murkowski said in a Friday interview with the Anchorage Daily News. “He has caused enough damage.”

If Murkowski, a moderate senator who supports abortion rights and opposed repealing the Affordable Care Act, became an independent and caucused with Democrats, the chamber would go from a 50-50 split in the new Congress to giving Democrats a 51-49 majority. This could increase the potential for Joe Biden to enact his agenda and for his party to retain control of the chamber after the 2022 midterm elections, when Murkowski faces re-election.

Even if Murkowski doesn’t associate herself with the Democratic Party, her independent vote would be a prime target on most legislation.

“If the Republican Party has become nothing more than the party of Trump, I sincerely question whether this is the party for me,” she said.

Murkowski blamed Trump for sparking violence by encouraging his followers to march on the Capitol as the Electoral College votes were being counted, even after Vice President Mike Pence said he had no constitutional authority to overturn the election results.

Trump “still told his supporters to fight. How are they supposed to take that? It’s an order from the president. And so that’s what they did. They came up and they fought and people were harmed, and injured and died,” she said.

Five days ago, Trump tweeted “Great!” on a post mentioning a primary challenge for Murkowski in 2022. The tweet also referred to other Republican senators who had opposed his efforts to overturn the November election.

Even as part of the Republican Party, Murkowski is a uniquely independent senator. She lost a primary in 2010 but won as a write-in candidate, soaking up votes from Democrats and unaffiliated voters. She also relied on Democrats and independent votes in 2016, making her less beholden to the party than most other senators.

In addition to blaming Trump for instigating the violence on Wednesday, she criticized his general performance, including his handling of the coronavirus pandemic.

“He hasn’t been focused on what is going on with Covid. He’s either been golfing or he’s been inside the Oval Office fuming and throwing every single person who has been loyal and faithful to him under the bus, starting with the vice president,” she said, adding that Trump was only staying in office for his own ego.