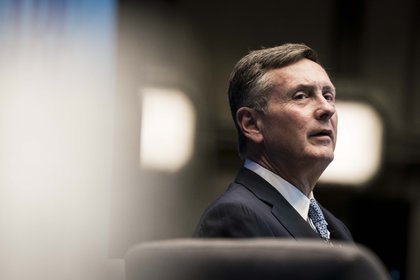 (Bloomberg) -- The U.S. economy’s future looks brighter thanks to the approval of vaccines to fight Cov-19, despite a worrying recent rise in virus infections, Federal Reserve Vice Chairman Richard Clarida said on Friday.

“The development of several effective vaccines indicates to me that the prospects for the economy in 2021 and beyond have brightened and the downside risk to the outlook has diminished,” he said in the text of remarks to be delivered to a virtual meeting of the Council on Foreign Relations.

Although the current surge in virus cases a “cause for concern,” Clarida also said the economy has proved to be more resilient in adapting to the pandemic than many inside and outside the Fed had expected -- thanks in part to monetary and fiscal support.

“While our interest rate and balance sheet tools are providing powerful support to the economy and will continue to do so as the recovery progresses, it will take some time for economic activity and employment to return to levels that prevailed at the business cycle peak reached last February,” he added.

The U.S. economy has hit a soft patch as virus infections have risen nationwide. Nonfarm payrolls decreased by 140,000 in December, the first decline in eight months, as soaring coronavirus infections exacted a bigger toll on jobs, particularly at restaurants.

The economy is widely expected to strengthen later in the year as more Americans get vaccinated against the virus and feel more comfortable in returning to restaurants and other public venues.