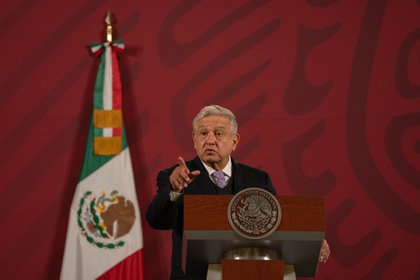 Andres Manuel Lopez Obrador, Mexico's president, speaks during a news conference at the National Palace in Mexico City, Mexico, on Wednesday, Nov. 25, 2020. Lopez Obrador reiterated Wednesday that hell wait until the U.S. presidential election process is fully concluded before he congratulates a winner.

Having private companies decide who can be silenced and censored goes against freedom of speech, Lopez Obrador said on Friday during his daily press briefing.

“It’s like a a censorship court is being created, like the Holy Inquisition, for the management of public opinion,” he said.

Facebook and other companies like Amazon.com Inc.’s Twitch extended their ban on Trump’s use of their social media platforms after his online posts encouraged violent rioters that stormed the U.S. Capitol. Twitter asked Trump to remove three tweets, including one video message of Trump expressing love for the insurgents and calling the election “fraudulent.” Access has since been restored.

On Thursday, Facebook Chief Executive Officer Mark Zuckerberg said his firm would extend the ban on Trump’s posts “indefinitely,” or for at least two weeks, until President-elect Joe Biden takes over.

“We believe the risks of allowing the President to continue to use our service during this period are simply too great,” Zuckerberg said in a post.

AMLO held a virtual teleconference with Zuckerberg in 2019 to discuss the expansion of Internet access and service in the country of 125 million people.

“He’s talking about his norms, but what about freedom and the right to information? What’s the role of legal and legitimately constituted authorities?” the president said. “We can’t allow one corporation that is the owner of Facebook, or of Twitter, decide who it can and who it can’t grant the possibility to communicate.”