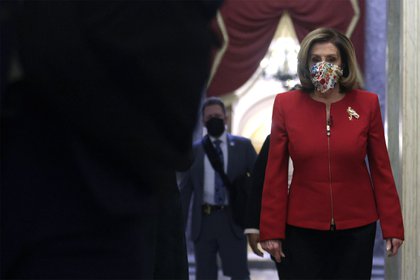 Pelosi said Democrats “will preserve every option” to force Trump from office, either through the 25th Amendment or impeachment and she’s instructed the Rules Committee to be ready to move forward with a motion or resolution.

“With great respect, our deliberations will continue,” Pelosi said in a statement.

The decision to proceed came despite President-elect Joe Biden suggesting Democrats should not spend time on impeachment, saying that his inauguration on Jan. 20 will be the quickest way to remove Trump from office.

Democrats and some Republicans have blamed Trump for egging on the crowd that stormed the Capitol on Wednesday as lawmakers were formally counting the Electoral College votes affirming Biden’s victory in the presidential election. There were at least five deaths and dozens of injuries resulting from the mob’s clashes with police.