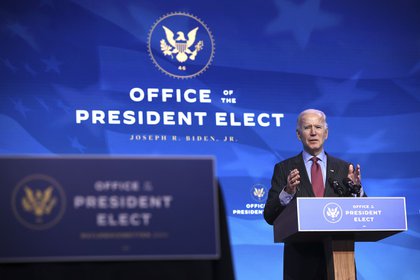 WILMINGTON, DELAWARE - JANUARY 08: U.S. President-elect Joe Biden delivers remarks after he announced cabinet nominees that will round out his economic team, including secretaries of commerce and labor, at The Queen theater on January 08, 2021 in Wilmington, Delaware. Biden announced he is nominating Rhode Island Gov. Gina Raimondo as his commerce secretary, Boston Mayor Martin J. Walsh his labor secretary and Isabel Guzman, a former Obama administration official, as head of the Small Business Administration. (Photo by Chip Somodevilla/Getty Images)

(Bloomberg) -- President-elect Joe Biden says he’ll introduce immigration legislation “immediately” after taking office later this month, and that his Justice Department will investigate the Trump administration’s separation of migrant children from their parents.

“I will introduce an immigration bill immediately,” he said in a news conference on Friday. He said that the Justice Department will determine responsibility for the family separation program, which led to more than 2,600 children being taken from caregivers after crossing the U.S. southern border, and whether it was criminal.

“There will be a thorough, thorough investigation of who is responsible, and whether or not the responsibility is criminal,” Biden said.

That determination will be made by his attorney general-designate, Merrick Garland, he added.

He didn’t detail his immigration legislation. He’s previously said he’ll end Trump’s ban on immigration from predominantly Muslim nations, and that he wants a path to citizenship for so-called Dreamers, undocumented immigrants brought to the U.S. as children.

Biden had previously promised an immigration overhaul within 100 days of taking office on Jan. 20.