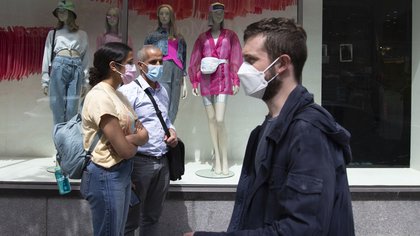 People wearing protective masks wait in line to enter at a La Maison Simons Inc. store in Montreal, Quebec, Canada, on Monday, May 25, 2020. Premier Francois Legault said in news conference in Quebec City that the province is entering "a new stage."

(Bloomberg) -- Quebec is implementing a curfew, Canada’s first of the Covid-19 pandemic, and adding new restrictions on business as it battles a rise in virus-related hospitalizations.

The nightly curfew across starts Jan. 9 and will last nearly a month, Premier Francois Legault said at a news conference Wednesday. His government also asked manufacturers and builders to curb activity by delaying the production of non-essential goods. Restaurants, retailers and many other industries are already closed or operating under tight limits.

The announcement brings Canada’s second-largest province closer to the measures it took in March, which shut down about 40% of the economy for eight weeks, according to government estimates.

“The situation in our hospitals is critical, especially in Montreal. There are still too many visits in homes,” Legault said. Only sparsely-populated areas of the province’s north are exempt from the curfew.

Quebec has been the worst-hit Canadian province in the pandemic. With 8.5 million people, it accounts for 23% of the country’s population but more than half of its virus deaths. The province had 202 virus patients in intensive care units as of Tuesday, more than double the number on Dec. 1 and close to peak levels of the spring.

After loosening restrictions in May, the government imposed new ones in October to quell a second wave of infections. Last month Legault tightened them further, extending school closures and limits on retailers. It hasn’t worked the way the government hoped.

The steady rise in hospital cases has been upsetting to Legault, who was forced to abandon plans to allow limited Christmas gatherings. The decision to impose a daily curfew from 8 p.m. to 5 a.m. marks a shift to a more coercive approach after months of exhorting people to stay home.

“The next month will be critical. We are in a race against the clock,” Legault said. “We lost that race a bit in the past weeks but we are capable of winning it. That’s why we’re announcing a shock therapy.”

It’s not just Quebec. Except for the more isolated Atlantic provinces, Canada has struggled to get a grip on the virus in recent months. The country has suffered 44 deaths per 100,000 people, on par with Germany, according to data from Johns Hopkins University. The ratio is 2 for South Korea, one of the most successful countries at handling the pandemic, and 109 for the U.S.