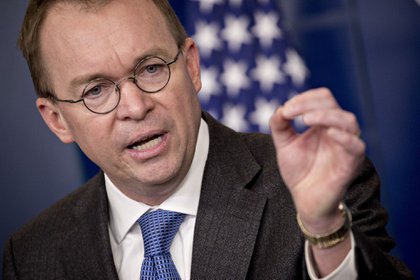 (Bloomberg) -- Mick Mulvaney, former White House chief of staff to President Donald Trump, said Thursday he is resigning from his current post as special envoy to Northern Ireland, joining a growing list of officials departing less than two weeks before the end of Trump’s term.

Mulvaney told CNBC that he called Secretary of State Michael Pompeo and resigned after a violent mob stormed the Capitol and disrupted the counting of Electoral College votes.

“Those who choose to stay, and I have talked with some of them, are choosing to stay because they’re worried the president might put someone worse in,” Mulvaney added.

Protesters mobbed the Capitol Wednesday after Trump encouraged supporters to object to what historically have been ceremonial proceedings. Lawmakers were forced to evacuate and four people died in the mayhem.

Trump later told supporters in a tweeted video “you have to go home now” but he didn’t condemn the violence.