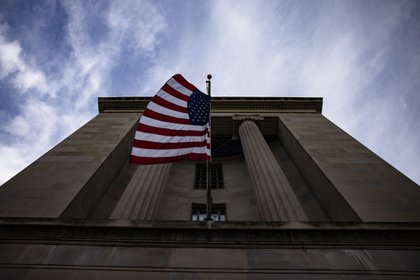 An American flag flies outside the U.S. Department of Justice (DOJ) headquarters in Washington, D.C., U.S., on Saturday, Jan. 2, 2021. A group of 11 Republican senators is pledging to oppose certification of President Donald Trumps election loss, rejecting leadership who warned against attempts to undermine the election or risk splintering the party.

(Bloomberg) -- Suspected Russian hackers broke into the Department of Justice’s Microsoft email system as part of the sprawling cyberattack carried out by way of software supplier SolarWinds Corp.

In late December, the Justice Department “learned of previously unknown malicious activity linked to the global SolarWinds incident that has affected multiple federal agencies and technology contractors, among others,” Justice Department spokesman Marc Raimondi said Wednesday in a statement. He added that hackers were able to access the Department’s Microsoft Corp. Office 365 email accounts.

“At this point, the number of potentially accessed O365 mailboxes appears limited to around 3% and we have no indication that any classified systems were impacted,” Raimondi said.

The Department of Justice, which found the hack on Dec. 24, has “eliminated the identified method by which the actor was accessing the 0365 email environment,” according to the statement.