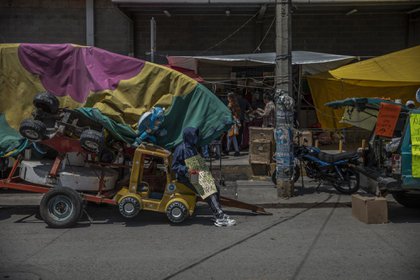 A person stands on the side of a road asking for charity in Ecatepec, Mexico, on April 30. Photographer: Alejandro Cegarra/Bloomberg

The government estimates that a record $40.6 billion was sent home by Mexicans abroad in 2020, up 11% from the previous year, Lopez Obrador said at his daily news conference.

“Last year was an exceptional year,” he said in a Wednesday morning press briefing. “Our migrant countrymen acted as heroes, as heroines, the equivalent of doctors and nurses who are saving lives.”

The payments have been a lifeline for many struggling households, with the debt-averse Lopez Obrador administration providing little fiscal stimulus to combat the slump.

The previous record for remittances was $36.4 billion in 2019. According to central bank data, Mexico already surpassed that record, with $36.9 billion between January and November.

The size of the flows surprised many forecasters who expected them to plummet due to the pandemic. Instead, immigrants’ incomes were bolstered by U.S. government relief payments and an economic rebound that recovered millions of jobs.

Mexico’s economy is expected to grow 3.5% in 2021, after shrinking around 9% in 2020, according to analysts surveyed by Bloomberg.