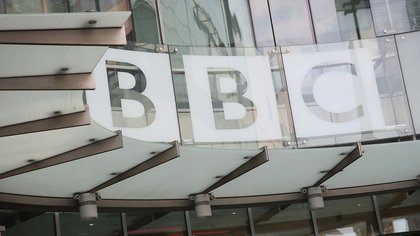 Broadcasting House, the headquarters of the BBC on May 12, 2016 in London.

Government officials are set to announce Sharp’s appointment in the coming days, according to people familiar with the matter. Representatives for the Department for Digital, Culture, Media and Sport and the BBC declined to comment.

Sharp, who spent 23 years at Goldman, arrives at a decisive moment. The century-old broadcaster faces challenges to its funding and business model as streaming platforms like Netflix Inc. and Alphabet Inc.’s YouTube upend people’s viewing habits, dragging them away from traditional media in growing numbers.

The chairman’s job is to make sure the taxpayer-funded institution carries out its public-service remit and remains free from outside interference. Sharp, 64, will work with the corporation’s new top executive, Director-General Tim Davie, as he grapples with heavy budget pressures and questions over the future of the BBC’s main source of funding -- a 157.50-pound ($214) annual levy on every household that owns a color TV.

The appointment will be a relief to some BBC insiders after earlier media reports named Charles Moore, a former editor of the right-leaning Telegraph newspaper and harsh critic of the corporation, as a top contender for the job.

Sharp has donated hundreds of thousands of pounds to the governing Conservative Party, according to the Electoral Commission website. He served on a board of economic advisers to Johnson when he was mayor of London.

He worked alongside current U.K. Chancellor of the Exchequer Rishi Sunak when the two were at Goldman, and acted as an unpaid adviser to the finance ministry at the start of the pandemic, playing a role in the bailout of arts organizations and the creation of an insurance program to allow TV production to restart.

Sharp studied politics, philosophy and economics at the University of Oxford, graduating in 1978.

The salary for the new BBC chairman position has jumped by 60% to 160,000 pounds, which is paid for three or four days’ work per week over a four-year term. Sharp might prove a frugal employee in other ways: he didn’t make a single expense claim during his time at the Bank of England.

His expected appointment was reported earlier by Sky News.