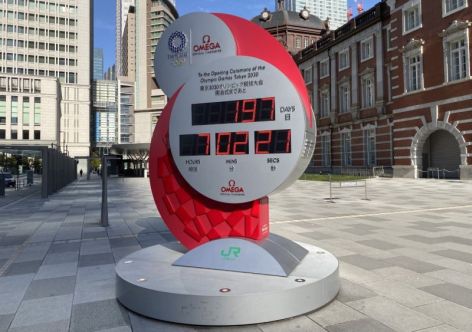 (ATR) Japanese Prime Minister Yoshihide Suga declared a state of emergency for the Tokyo metropolitan area on Thursday evening with 197 days to go until the Tokyo 2020 Olympic Games Opening Ceremony.

The anticipated announcement followed the news of another record-breaking number of new coronavirus cases in the capital and across the host country of the delayed Olympiad.

On Thursday Japan reported over 6,000 new cases with Tokyo reporting 2,447, a single-day record – up from 1,591 the previous day - with the hospitals now feeling the strain of the third wave as medical experts had predicted a New Year spike in cases.

The new state of emergency is in place for Tokyo and the surrounding Saitama, Chiba and Kanagawa prefectures and comes into effect on Friday until Sunday February 7.

Yasutoshi Nishimura, Japanese minister in charge of the response to COVID-19, detailed in parliament the government’s decision on Thursday afternoon ahead of Prime Minister Yoshihide Suga’s declaration to the nation.

As the virus continues to surge, and after much deliberation, and pressure from Tokyo's governor, Yuriko Koike, and her neighboring counterparts, in the Saitama, Chiba and Kanagawa prefectures, Prime Minister Suga finally announced today that more stringent measures will be applied as Japan wrestles with the dual aim of controlling the pandemic and hosting the Olympics and Paralympics this year.

Prime Minister Suga said: "We have asked the restaurant industry to reduce their opening hours.

"There has been positive effects already after applying this at certain times before. However we are now receiving an increase in infections in Tokyo and neighboring areas.

"Today, Tokyo exceeded 2,400 new cases. Under this situation we need to stop the spread of COVID-19 and reduce the number of infected people.

"In order to do so we have decided to declare a state of emergency. We need to implement strong measures. For one year we have applied different measures and we have learnt from this.

"Sports events will have a limited amount of spectators, this limit will be 5,000 people."

Residents were asked in a more robust manner to heed the advice of the government and to stay at home while companies will be more receptive to staff working from home with the aim of reducing office footfall by 70 percent.

Restaurants and bars have been asked to stop serving alcohol by 7pm and to close at 8pm in order to encourage people to return to their homes earlier in the evening while also being asked to refrain from making all non-essential trips.

Larger scale events should also finish by 8pm and the number of spectators is expected to be capped at a maximum of 50 percent of the capacity or 5,000 people.

In December, Japan halted its much-criticized ‘Go To Travel’ subsidized scheme which was designed to keep tourism active at a domestic level but was blamed by some as accelerating the spread of the virus across the country.

The government has also put a stop to new entries from foreign countries while foreigners who reside in Japan will still be able to travel in and out subject to negative tests before travelling to Japan and on arrival in addition to a three-day quarantine period.

The move follows also a spate of high-profile cases among athletes including sumo star Hakuho who the Japan Sumo Association (JSA) announced on Tuesday had tested positive after proclaiming a loss of smell.

The top-ranked Mongolian, who now has Japanese citizenship and is the son of 1968 freestyle wrestling Olympic silver medalist Jigjidiin Mönkhbat, has regularly spoken of his desire to be involved in the Tokyo Olympic Opening Ceremony as a tribute to his late father.

The Japan Sumo Association announced on Wednesday that the grand champion’s stable mates had all recorded negative tests for the virus.

Japanese tennis player Yuichi Sugita revealed on Twitter on Tuesday that he had returned a positive test and was forced to withdraw from this week’s ATP Antalya Open.

"Now my fever and cough have subsided and I am in good health, we will prepare again for the Australian Open," said the world number 102-ranked player, who has targeted a February return.

Despite the new state of emergency the New Year Grand Sumo Tournament in Tokyo is scheduled to start as planned on Sunday albeit with a more low-key setting after ticket sales were stopped on Wednesday ahead of the government’s announcement.

Japan’s premier domestic rugby competition, the Top League, which this year features the likes of New Zealand’s two-time World Player of The Year Beauden Barrett of Suntory Sungoliath, is due to start on January 16.

Prime Minister Suga declared earlier this week that the country is still determined to host the Olympics this year and that all efforts will be made to safely stage the Games which were officially postponed in March 2020.

As part of the new measures, the Tokyo Metropolitan Government (TMG) decided to postpone the ongoing exhibition of the Olympic and Paralympic Games Tokyo 2020 torches until at least the end of January. The exhibition tour around Japan began on November 7 and is slated to end on March 16, nine days before the start of the Torch Relay.

Written and reported by Mark Pickering in Tokyo