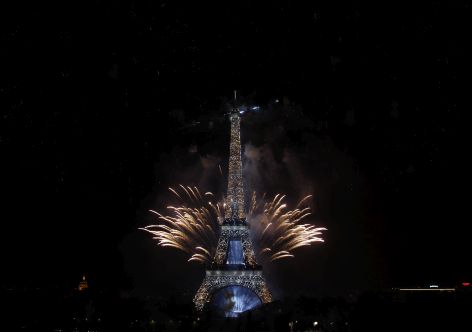 PARIS, FRANCE - JULY 14: Fireworks burst around the Eiffel Tower as part of Bastille Day celebrations on July 14, 2015 in Paris, France. Bastille Day commemorates the storming by Parisians of the Bastille fortress and prison on July 14, 1789 in Paris. (Photo by Thierry Chesnot/Getty Images)

(ATR)A team of experts will decide on a sailing venue for a potential 2024 Paris Olympics in September.

The French Olympic Committee must submit a letter of intent to bid for the 2024 Olympics to the IOC by September 15. Boston, Budapest, Hamburg, and Rome are the other cities bidding for the 2024 Games.

Earlier this month, Paris MayorAnne Hidalgo suggested that the Seine River could hold the swim leg of the triathlon if the city's bid to host in 2024 is successful.

In a statement to Around the Rings,the International Triathlon Union said that its president Marisol Casado mentioned the idea to Hidalgo at a meeting in May.

"Should Paris win the 2024 bid, we would welcome the opportunity to hold triathlon in the heart of the city," an ITU spokesperson said.

"We would work closely with the city to raise the standard of water quality for both the safety of the athletes and the enjoyment of all as a legacy of the Olympics."