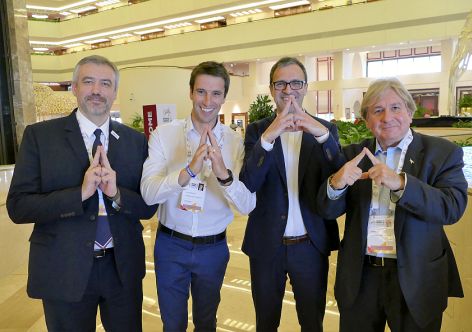 (ATR) Leaders of the Paris bid for the 2024 Olympics say they will aim their presentation during the ANOC General Assembly on Tuesday to appeal to national Olympic committees.

"Tomorrow we will reveal a specific declaration for NOCs to tell them how much we want to be a good and the best partner for NOCs," Paris 2024 co-chairman Tony Estanguet tells Around the Rings in Doha, Qatar.

Estanguet says the bid team has the experience to anticipate the needs of the NOCs to help their athletes prepare for the Olympic Games.

"This is the first time this bid is led by the sport movement in France and led by the athletes, so we have this knowledge among our team," he says. "They know the needs of the NOCs and they have already engaged with the NOCs and we want to tackle every challenge the NOCs face.

"Success can be reached only with support and cooperation from NOCs," Estanguet added. "We want to open this new way of cooperation with the NOCs and this is what we will show tomorrow."

Along with catering to the NOCs, Paris will also seek to enhance the fan experience if they are awarded the 2024 Games.

"We want people to have fun during the Games in Paris," says Paris 2024 chief executive Etienne Thobois. "The great Games are the ones that have celebration going on. We have a fantastic city center that can showcase the Games and welcome the world."

"We want to host Games that will be lived and experienced," added Estanguet.

An essential aspect to improving the fan experience inside and outside the venues is ensuring that all spectators will be safe. This week marks the anniversary of the 2015 terror attack at a Paris concert hall, a reminder of the challenges facing France.

"French President Francois Hollande came to Rio to personally tell the Olympic family how much there is a very strong commitment to guarantee the safety of the international sport event," Estanguet says.

"You saw it with the Euro, the football championship which was a big success and the safety was completely guaranteed. But we are still working on it."

The bid currently enjoys strong support from Hollande but the country could elect a new president in May 2017.

Bid leaders say any potential changes will not affect Paris 2024 as they’ve had the backing of all political parties since the beginning.

"There is no concern at all about this, they are all in favor," Estanguet says.

"They understand the power of this project and the support of the French people."

For more of Estanguet's thoughts on French politics and the bid, click here to watch the video.

The bid’s presentation on Tuesday will be led by Olympians including Estanguet and Olympic judo champion Teddy Riner.