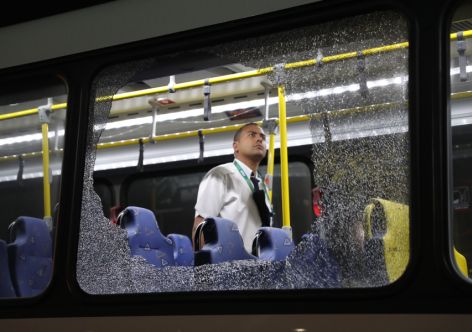 TOPSHOT - The damages to the windows of an Olympic journalists bus hit while driving on the transolympica highway are inspected by an official in Rio de Janeiro on August 9, 2016. - Argentina OUT - LA NACION / AFP / LA NACION / Maximiliano AMENA / Argentina OUT (Photo credit should read MAXIMILIANO AMENA/LA NACION//AFP/Getty Images)

(ATR) A U.S. basketball reporter says a media bus she was on was hit by gunfire, disputing Rio 2016’s claims that windows were broken by a rock.

Lee Michaelson, a women’s basketball reporter and a retired U.S. Air Force captain, was among 12 journalists traveling back from the Deodoro Olympic Park to the Main Press Centre (MPC) at 7.30pm last night when the bus came under attack. Several journalists suffered minor injuries.

Speaking at the daily briefing today, Rio 2016 spokesman Mario Andrada said the first findings of a forensic study revealed that a rock had been thrown smashing the windows. He said the bus driver kept going according to protocol and police escorted the vehicle back to the Main Press Centre where it was examined and taken away for forensic analysis.

Rio’s head of security Luiz Fernando Correa told the press conference he considered the attack as an "act of vandalism not with criminal intention of injuring one person or another".

Shaken-up and angry, Michaelson gave her first-hand account of the attack to journalists at the press centre. She described Rio 2016’s explanation as "horseshit".

The Hoopsfeed.com reporter said there must have been some good Olympic rock throwers around. Michaelson heard gunshots in quick succession and believes a small caliber weapon was used. The incident happened halfway between the MPC and Deodoro on the TransOlympica highway, which is currently only being used for Olympic Traffic.

Asked how she was sure bullets were fired, she pointed to the damage it created to the bus, which was moving at around 50 mph. There were two bullet impacts on separate windows at between shoulder to head height, she added, rejecting Rio’s 2016’s explanation that the steel surroundings of the window were hit.

"Having been around guns all my life, having served in the military… I am not an expert in firearms analysis but I sure as hell know what the sound of a gun is," Michaelson said.

The basketball reporter, who lives in California, had some praise for the quick response of the police but suggested the driver had not been adequately trained to handle such a crisis situation. She also questioned why police did not search the bus for bullets or speak with the 12 reporters caught up in the incident to take witness statements soon after the vehicle was back at the main press hub at the Barra Olympic Park.

Michaelson has her 19-year-old daughter with her in Rio. While she was heading back to Deodoro Wednesday lunchtime and is "not fearful", her message for Rio 2016 is clear. She had "no confidence whatsoever that should something more serious happen that they would be prepared, equipped and compliant with doing what the situation requires".

Was she worried for other reporters heading to and from Deodoro in the days before the Games end?

"You can’t live your live constantly worrying about what might happen. You can only take reasonable precautions. I think they have taken those to a point. What I didn’t see was appropriate response," she said.

Rio’s security chief Correa said a full investigation was underway and the police presence on the highway to Deodoro had been stepped up, with more frequent patrols. But there will be no police escort for media buses.

Crime problems involving Olympic visitors have plagued the first five days of the Games, with a number of muggings reported, two controlled explosions on suspect bags carried out at Copacabana and a stray bullet triggering concerns at the equestrian venue.

Rio 2016’s Andrada and IOC spokesman Mark Adams were asked if they could guarantee the safety of the thousands of media in Rio covering the Games.