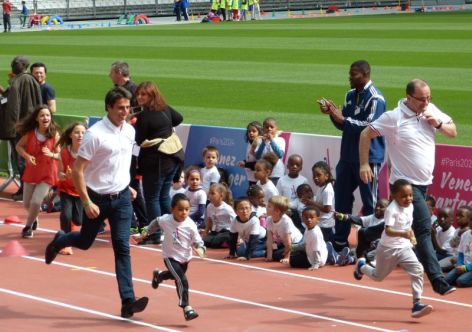 Los Angeles may boast the #Followthesun slogan but – to borrow the Paris motto – it seemed like it was #Madeforsharing on day two of the IOC evaluation commission’s visit the French capital.

The IOC got down to work early on Monday morning, dodging congested traffic around the city thanks to a police escort on their venue tour.

The 11-member panel had lunch on a riverboat, with the Paris bid’s impact and legacy director giving a presentation.

Renowned French gastronomic flair has featured highly on the IOC’s trip so far. Last night, five Michelen-star chefs each cooked a course for the IOC commission.

The IOC tours Parc des Princes and Roland Garros Monday afternoon, where they will intersect with media.

A photo opportunity at the Stade de France earlier in the day was the only time the IOC was paraded in front of the media. The same approach was taken in Los Angeles – two photo opportunities were offered but the IOC didn’t take any questions.

There were, however, a couple of points of difference between the IOC’s inspection in Los Angeles last week and in Paris.

Around the Rings reporter Kevin Nutley, who has covered both tours, says there was far more walking involved on the LA trip, though more refreshment breaks were offered.

In Paris, formal presentations with slide shows greeted media at each stop; in Los Angeles venue information was made available to media but no detailed presentations were given.

A boat ride on the Seine was the highlight of the media tour of Paris 2024 venues.

The media tour, complete with police escorts, began the day at the site for the potential Olympic village, specifically the planned main dining hall which is currently the Cite du Cinema.

The building backs on to the River Seine, which organizers explained would make an ideal relaxation spot for athletes staying on the 50 hectare (124 acre) site. The housing development project on the site means that Paris might have to make alternative arrangements should they be offered to host the 2028 Games.

The tour then moved to the proposed site for the Main Media Center, which organizers will plan to host up to 4000 accredited journalists.

If Los Angeles has its Follow the Sun mantra, then Paris could claim Follow the Seine as the city’s river played a major role in the day’s tour. Journalists were treated to a lunchtime boat ride from near Notre Dame all the way to the Alexander III Bridge, taking in the sunshine and famous Paris attractions.

Deputy Mayor Jean Francois Martins acted as tour guide for much of the morning, giving insight into city’s initiatives such as the plan to clean the waters, meaning people will be able to swim in the parts of the river from "July this year".

But the language of the various speakers throughout the day was telling, as venue descriptions were given as if Paris was definitely hosting the Games in 2024. There were no sentences that ended, for example, with "If Paris were to win the bid in September". It could simply signify the confidence coursing through the Paris 2024 team.