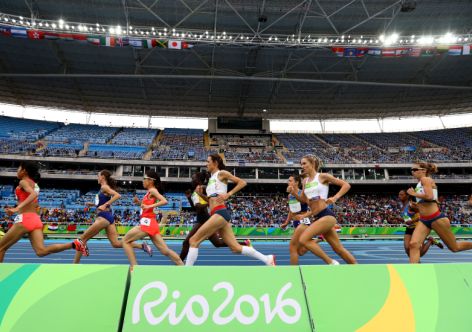 (ATR) The IOC and Rio 2016 have defended low ticket sales on the first day of the athletics competition at the Olympics.

Games spokesman Mario Andrada told the daily press briefing that 465,000 tickets had been sold to all Olympic venues on day seven.

But he admitted only 58 percent of tickets had been sold for the first session of track and field at the Olympic stadium and only 65 percent for the evening session.

He did however confirm that all the finals, including the 100m showpiece on Sunday night, are sold out.

"We are not disappointed because we understand that without local heroes and local athletes some of local public take longer to fall in love with track and field," Andrada told the news conference.

He said the presence of global superstars such as Usain Bolt, who is set to go head to head with the USA’s Justin Gatlin in the Olympic marquee event, and better engagement with Brazilians would help to fill seats over the coming days.

Speaking of the sold-out finals, he said "We are on the ball game."

Andrada hit back at a reporter’s accusation that Rio 2016 wasn’t doing enough to fill stands with young disadvantaged children who are part of the Games social project: "Yes, we are taking schoolchildren to the venues."

Communications director Mark Adams was asked if the IOC could have done more to increase ticket sales for the No.1 Olympic sport to ensure all the sessions were sold out – as they were at most of London 2012’s events.

"We obviously want to see full stadiums. Could we do more? You can always do more. And we would like to see a full [athletics] stadium. I think the level of sales is pretty good," he said.

He denied that international ticket prices were pegged too high compared to the cost for locals.

"It’s expensive to come here no doubt about it but there are tickets for all pockets," Adams said. "People understand it is a considerable investment. I have seen a lot of people from different countries who are happy to be here."

The biggest news from the morning session: Ethiopia's Almaz Ayana obliterated the world record by 14 seconds to win gold in the women's 10,000m. She finished in 29:17.45.

The IOC has opened disciplinary proceedings against Kenyan coach John Anzrah after he was alleged to have provided a urine sample in place of 800m runner Ferguson Rotich.

IOC spokesman Adams said the committee had noted the decision of the Kenyan Olympic Committee to send home Anzrah: "We are pleased they took swift action."

Rotich is also the subject of an IOC probe but was free to compete today and proceeded to the semi-finals.

Rotich is reported to have given Anzrah his pass to get breakfast in the Olympic Village on Wednesday, according to PA Sport.

The confusion arose when Anzrah was then asked if he could give a urine sample for a drugs test. But his passport at doping control didn’t match the accreditation. The IOC’s Adams said Anzrah did not end up g=providing a urine sample and Rotich was eventually tested.

It’s the second Kenyan doping scandal at Rio 2016 after athletics coach Michael Rotich was sent home from the allegedly providing advance warning of anti-doping tests to athletes in exchange for thousands of dollars.

The IAAF on Friday suspended Michael Rotich for 180 days pending a full investigation.