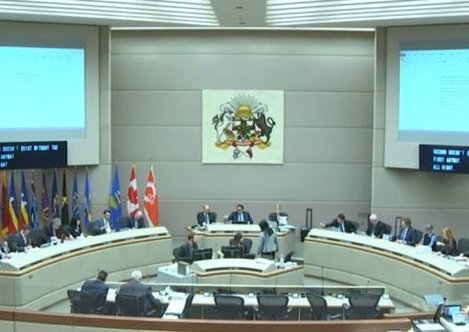 (ATR) Calgary 2026 is still alive, at least until a November 13 plebiscite.

The Calgary City Council voted 8-7 in favor of a motion to reconsider its 2026 Winter Olympics bid. The proposal needed a two-thirds majority, or 10 votes, to pass, meaning the bid will continue.

Calgarians will now go to the polls in 13 days to vote on adopting the Winter Olympics bid as is. Councilors were swayed by a last minute funding plan unveiled by Calgary 2026, the federal government, and the provincial government.

The council spent hours questioning the Calgary 2026 bid corporation leaders before debating the merits of staying in the race to host the Games. Backers of the bid were encouraged to show support to the council by showing up at city hall wearing red. Numerous Calgary 2026 officials and prominent Canadian Olympians encouraged the effort.

The bid now languishes in an awkward phase where Calgarians will get their say on its survival despite a majority of the City Council voting to end the bid. Some councillors who agreed to keep the bid going did so because early voting for the plebiscite had commenced.

It remains to be seen if Calgary can stem the tide of unsuccessful Olympic public votes. The last successful Olympic referendum came in 2013 when Oslo voters backed a 2022 Winter Olympics bid. However, the country dropped the bid midway through the process.

Vancouver 2010 passed a public referendum during its bid process, before winning the right to host the Olympics at the 2003 IOC Session.