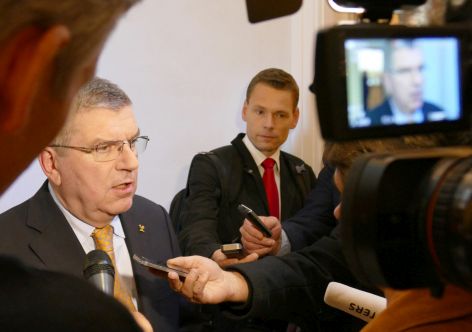 (ATR)IOC President Thomas Bach says that as an Olympian, he findsrecent developments in some sports "particularly upsetting."

In an op-ed for the Los Angeles Times, the IOC chief shares his thoughts on athletes who dope.

"What saddens me most as a former athlete is that they erode the trust in the clean athlete," Bach adds. "Clean athletes who push themselves day-in day-out pursuing their dreams see the finger of suspicion pointing at them."

"This is the very worst 'side effect' of doping."

Since then, Bach and other Olympic leaders have come forward to defend clean athletes and the work the International Association of Athletics Federations is doing to flush out doping cheats.

"We must do everything we can to protect these millions of clean athletes around the world," Bach says.

"Yes, these are difficult times for sport. But yes, it is also an opportunity to renew the trust in this power of sport to change the world for the better."

"The Brazilian government has missed a key deadline to secure a deal for environmentally friendly energy for the 2016 Rio Olympics," Panja says.

"If no agreement is reached, Olympics organizers say they will have to use diesel generators, notorious for high emissions, to power the entire two-week event."

Fromconstruction delays, civic unrest and questions about pollution in the open waters where sailing and other events will take place, Wharton adds that Brazil "as a wholeis dealing with corruption scandals and impeachment proceedings against its president."

The German Press Agency DPA also discusses Rio 2016's plan to cut more than $500 million from their $1.9-billion operating budget. The DPA says that in the backdrop of preparations for the Games, "three athletes who have fled their home countries have been given hope of participating at the Rio Olympics."

IOC director Pere Miro told reporters,"The trio are a swimmer from Syria now in Germany, a Congolese judo player now in Brazil and an Iranian taekwondo fighter who is in Belgium."

The DPA says the IOC called on IFs to "highlight the cases of other refugee athletes who could take part at Rio under the Olympic flag if they meet the sporting qualifying criteria."

"There has been a massive improvement of the situation in the past months," Reedie said to reporters on the sidelines of Rio's presentation to the IOC Executive Board this week.

"That's good news. Now you have to determine the service levels that athletes and international federations expect."

The U.S. basketball star who recently announced that this season would be his last has "made it clear of late that he wants to finish his storied run in Brazil," Amick says.

"But if you're Colangelo, this is as uncomfortable as roster situations get."

"After enduring months of corruption scandals, FIFA, the governing body of global soccer, is under intense pressure to reform," Dodd writes.

"As corporate sponsors and law enforcement authorities watch closely, there is one obvious change that could improve global soccer on multiple fronts: more women."

In a separate article,New York Times writer Rebecca Ruiz shines a different light on the relationship between Swiss and U.S. authorities currently investigating corruption in FIFA.

"In contrast to that publicly harmonious partnership, government officials from the two countries have hardly worked in lock step," Ruiz says.

AP columnist John Leicester says, "Reforming FIFA, but not its members, would be like putting lipstick on a pig.

"Perhaps the only thing scarier than the scale of corruption that U.S. investigators are uncovering in football is the thought that a sizable chunk of those indicted administrators might soon also have laid paws on the sport's crown jewel, the World Cup."

In a shock defeat last month, the results of a public referendum showed 51.6 percent of Hamburg residents opposed the bid both in postal votes and at the ballot boxes. Of the 650,000 people who voted - 1.3 million were eligible - only 48.4 percent were in favor.

Leonid Bershidsky, a Berlin-based contributor for Bloomberg View contributor, says, "Perhaps making such votes obligatory for all bidding cities could be the first step toward restoring the tattered reputation of global sporting events."

"Leaders of No Boston 2024 and No Boston Olympics are showing opposition groups elsewhere how they helped turn public opinion against the city’s bid for the 2024 summer games, forcing organizers to withdraw."