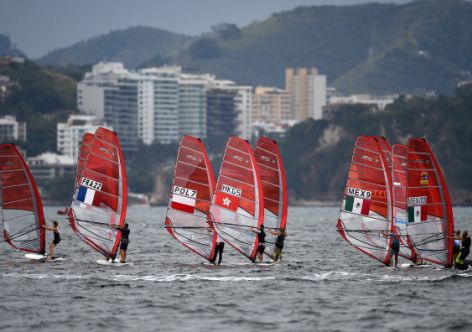 (ATR) Members of the Austrian sailing team said a boat was damaged by garbage at the Aquece Rio test event.

"We saw a dead dog and destroyed our center board because of some strange plastic piece we hit," Nico Delle Karth told Bloomberg Sports in an email.

Rio 2016 officials have come under fire for the state of Guanabara Bay, but event organizers say the water will meetinternational standards by the Olympics.

Sailors told Bloomberg that the bay smelled of garbage because of the raw sewage that gets dumped into the bay.

In May, Rio de Janeiro Mayor Eduardo Paes said he was "sorry" they could not get the bay fully clean in time for the event.

"Significant advancements have already been made since Rio was awarded the Games in 2009, and the improvements will continue up to and beyond 2016," Rio 2016 said in a statement ahead of the Aquece Rio test event.

"The health and welfare of the athletes is always a top priority, and there is absolutely no risk to anyone involved with the Aquece Rio event."

The Aquece Rio regatta is the first test event for the 2016 Olympic Games. Competition will run between August 2-9 in Guanabara Bay. The regatta will feature 324 athletes from around 34 nations in 10 classifications.