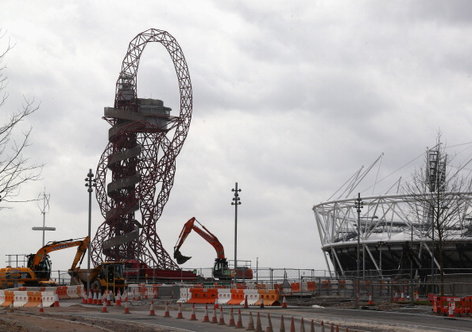 LONDON, ENGLAND - APRIL 16: Redevelopment work takes place around the ArcelorMittal Orbit on the site of London 2012 Olympic Games prior to the opening of a portion of the park to the general public on April 16, 2013 in London, England. In 100 days the first section of the developed site of the 2012 Olympic Games, which will be known as Queen Elizabeth Olympic Park, will welcome visitors. The park's 292 million GBP conversion includes the removal of temporary venues, the refitting of stadia for public use, the removal of Olympic Games sponsor's retail units and extensive landscaping. The re-opening of the northern portion of the park will take place on July 27, 2013, on first anniversary of the London 2012 Olympics, for a festival celebrating the culture of East London. The park will be fully open to the public in spring 2014. (Photo by Oli Scarff/Getty Images)

The chief executive officers of GE and Coca-Cola were named in a report detailing CEO compensation in America.

Jeffrey R. Imment, CEO of GE, and Muhtar Kent, CEO of Coca-Cola, were the second and third highest paid CEOs respectively named in the report.

The other three U.S.-based IOC TOP Sponsors - McDonalds, Procter & Gamble, and Dow Chemical - were not featured in the report.

Chechen rebel leader Doku Umarov, who urged violent action at the Sochi Winter Games, is dead, according to a post on a militant website.

The post on Kavkaz Center, a website for Russia’s Islamist militants, says Umarov "became a martyr," but gives no further details.

A spokesman for Russia’s anti-terrorism unit, however, could not confirm the report, according to Reuters.

Umarov has been declared dead a number of times in recent years by Russian authorities.

His Caucusus Emirate group has claimed responsibility for the Moscow airport bombing in 2011 that killed 36, as well as the 2010 Moscow metro suicide bombings which killed 39. He also urged his fighters to attack the Winter Olympics in Sochi.

A TV watchdog group in France has issued a ruling as a result of comments by two France TV broadcasters during the Sochi Games.

The group said it "found that statements made by these commentators, their content, and their gritty nature relating in particular to the physical aspect of sports were likely to reflect gender bias."

Candeloro brought complaints by saying, "I know more than one snake that would like to bother the Canadian Cleopatra."

Another offending comment came when one was heard to say, "She has a lot of charm, Valentina, a bit like Monica Bellucci. Maybe a little less chest, but good."

France TV executive Bilalian Daniel defended the comments, telling the Connexion, "Sport is a moment of entertainment. There are excesses of enthusiasm and joie de vivre. I do not see how political correctness should prevail in this area."

Tickets to the ArcelorMittal orbit attached to the Olympic Stadium in London have gone on sale.

The 114.5 meter tall sculpture is the largest in the United Kingdom, and will open April 5 the same day as the south side of the London Olympic Park.

The northern side of the Olympic Park opened in July 2013, and the Olympic Stadium will reopen in 2016.

The south side of the park has been closed since the London Olympics ended.