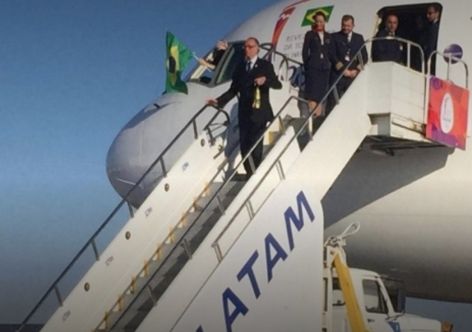 (ATR) The Rio 2016 torch relay is underway in Brazil after the flame arrived in Brasilia Tuesday.

Organising committee president Carlos Nuzman stepped off the plane from Switzerland to the Brazilian capital with the safety lantern holding the flame.

Speaking at the Palácio do Planalto, Nuzman insisted "Rio is ready", despite ongoing concerns about delivery of various aspects of the Olympic project that continue to cloud the run-in to the Games.

"207 delegations will be at the Maracanã for the opening ceremony - including a refugee delegation," Nuzman added.

President Dilma Rousseff was also at the Olympic flame welcoming ceremony. "It is wonderful that Brazil is the first country in South America to host the Games," she said.

"I am very proud to welcome the Olympic flame that is the great hope of humanity, peace, union and friendship.

"We are going to integrate this nation with the Olympic spirit and involve the people in this historic opportunity."

Rousseff said the Olympic torch relay would showcase the diversity of cultures in Brazil on its mammoth 20,000 kilometertrek through states and cities.

Referring to the country's deepening economic and political crises, Rousseff said:"We know the political difficulties that are inthe country but Brazil is capable of pulling off the Games in even this very difficult period we are living in."

"We have created the conditions for this and we are going to receive everyone well. People can fight for the right for democracy in Brazil and this flame can be a guide for humanity and celebrate the peace... and everyone is going to be proud to offer the best Olympics in the world and showcase the world our values."

She thanked sports minister Ricardo Leyser for preparing Brazil's athletes to win more medals than at the London 2012 Games.

The Brazilian president lit the Olympic torch and handed the flame to Fabiana Claudino, the first torchbearerwho helped her country win Olympic golds in women's volleyball at Beijing 2008 and London 2012.

In his brief address, Leyser recalled Brazil's journey from the 2007 Pan-American Games to the Rio 2016 Olympics.

The Olympic flame's trek around Brazil over the next 90 days involves 12,000 torchbearers.More than 250 cities will take part in the celebrations.

The torch will arrive at Rio's Maracanã Stadium on Aug. 5, the day of the Olympic opening ceremony.

Reported by Aaron Bauer in Brasilia and Mark Bisson