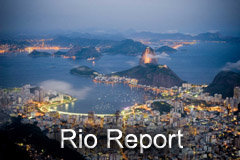 (ATR) The chief executive of Rio 2016 says the biggest challenge for Brazilian organizers is to sell more than 2.7 million tickets for the Paralympic Games.

Leonardo Gryner was speaking to media in London Olympic Park to celebrate four years until the opening of the Rio Paralympics on September 7, 2016. He praised the 2012 Paralympics but was confident that his team could produce an even bigger event.

"The largest challenge we have now is to sell more than 2.7 million tickets for the Rio [Paralympic] Games," he said.

"We understand London did raise the bar very high this time, but we must do all our best to enhance and promote the Olympic and Paralympic movements. So in order to make it move forward, we will need to match and surpass London. We take this as a challenge and we will go after that.

"For instance, we now have increased interest already from TV companies around the world that are coming to us interested in acquiring the rights to broadcast the Paralympic Games in 2016, and that’s the result of the great success that London delivered here."

Brazilian Paralympic Committee president Andrew Parsons was alongside Gryner and echoed his comments but said that surpassing London will not be an easy task.

"Yes, we have a big, huge challenge ahead, but one of the promises we made when we bid was when we give back the flag to the IPC at the closing ceremony of the Rio Games, we will give back a Paralympic Movement that is more stronger than before," he said.

Parsons added that the success of Brazilian Paralympians and their significant media coverage, such as Alan Oliveira, has already started their campaign to raise awareness of disability sport back home.

The day the Rio Paralympics will open is also Brazil’s Day of Independence – something that Gryner said they purposely took into consideration when planning the Olympics and Paralympics.

"We picked the date on purpose for the opening day of the Rio Paralympics," he said. "When we were planning the period we picked for the Olympics Games, it made sense in that it was do-able to make the transition in the time given and will be a great time to open the Games during our national day."

"It’s already a holiday in Brazil, and it’s a great festivity so it couldn’t be a better day to start the Paralympic Games in 2016."

The celebration of Brazilian independence will be a constant theme with the Rio Paralympics and will tie in with the flag handover during Sunday’s closing ceremony. Rio will have an 8-minute slot which the producers of the segment promised will celebrate the spirit of Brazil: joy.

Reported in London by Christian Radnedge