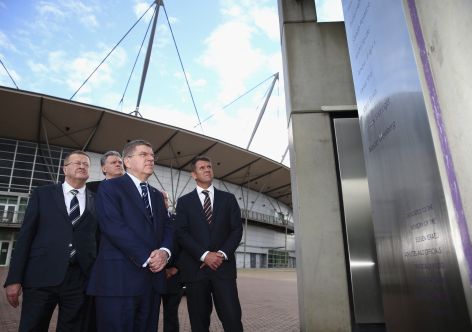 (ATR)The Foundation for Global Sports Development (GSD) is honoring the 11 Israelis killed at the 1972 Munich Olympics in its first documentary film.

Post-production on the documentary short, titled "Munich 1972 & Beyond," is done and GSD is prepping for the film's release.

Founding GSD board member Dr. Steven Ungerleider spoke with me about the documentary and said,"It's been 43 years since the massacre of 11 Israelis.The important thing is it's finally happening."

Ungerleider told ATR that the documentary sheds light on the event, "not the horror or the tragedy.

"It bears witness to the victims. The film and memorial will be a positive place for healing."

Aside from producing a documentary, GSD broke ground on a memorial in Munich last month to honor the Israelis slain at the 1972 Games.

Earlier this year, the IOC Executive Board took steps to address the issue of mourning at the Olympic Games. Under measures that will go into effect at the 2016 Rio Olympics, a special area will be set up in the Olympic Village for athletes to mourn the loss of family or friends.

A moment of reflection will be observed during the closing ceremony for everyone at the Games to remember those they have lost, not necessarily during an Olympics.

"IOC president Thomas Bach is making sure that people feel empowered, not only with the Munich memorial, but also with a place to mourn in Rio," Ungerleider said.

"The IOC is 100 percent behind us," he added. "IOC leaders have beenvery positive, very proactive.

"In working with all of the parties involved in the documentary, everybody has really stepped up.

"People have come away in a great spirit of collaboration."