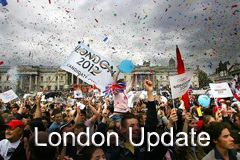 London 2012 is at the center of two significant signs of the easing of economic conditions, with a $750 million investment in the project from commercial bankers and further talks with a potential new sponsor.

But Lloyd’s-TSB, the 2012 Olympic organizers’ first tier one sponsor to sign up, on Tuesday made nearly 1,700 staff redundant with the closing of its Cheltenham & Gloucester building society arm. The sponsorship of the Olympics is unaffected, the bank having earlier in the week repaid $4 billion which it received last fall as part of the U.K. Government’s bail-out of The City.

For Olympic organizers, financial matters continue to improve, with sponsorship talks reported to be at an advanced stage with Eurostar.

LOCOG is seeking an official rail transport partner, with French-owned Eurostar believed to be favored because of its international services.

The second-tier sponsorship deal could be worth up to $30 million, in the main provided in free rail tickets from Europe to London for thousands of athletes and officials.

London’s Olympic Park is adjacent to Stratford International rail station, where special Javelin trains will stop, having brought passengers from St Pancras, where Eurostar trains stop after travelling through the Channel Tunnel from Paris and Brussels.

A day-return ticket to the London Olympics from the French and Belgian capitals costing less than $100 is being considered.

In return for its input, Eurostar would carry London 2012 branding on its express trains.

The partnership would also help to deliver on London 2012’s environmental promise of being the “greenest Games ever”, which includes getting 100 percent of spectators to use public transport for journeys to venues. This week, the Olympic Delivery Authority announced that 10 percent of construction workers employed in the Olympic Park are walking or cycling to work.

LOCOG has already achieved two-thirds of its sponsorship target. Neither LOCOG nor Eurostar would confirm the report of the talks in the Evening Standard newspaper.

Concerns over the funding package for the Games were eased at the weekend when Barclays and the European Investment Bank (EIB) belatedly stepped in with $750 million of investment for the London 2012 Olympic Village.

The move came barely two weeks after the U.K. Government had controversially dipped into its Olympic contingency fund for $500 million to effectively “nationalize” that part of the project, which will house 17,000 athletes and officials at Games time and provide 1,400 apartments from 2013.

London’s Olympics have been left unscathed by Prime Minister Gordon Brown’s ministerial reshuffle over the weekend.

With Brown under political pressure after poor showings in local and European elections, he has made several changes to his team, but Tessa Jowell stays in place as Olympics Minister and Gerry Sutcliffe remains as minister for sport.

Sutcliffe’s boss at the Department for Culture, Media and Sport, Andy Burnham, was promoted in the reshuffle to become Health Secretary. He was replaced by former BBC journalist Ben Bradshaw, who is expected to concentrate his time on art and broadcast matters.

London 2012 has hired one of the high-profile rejects from The Apprentice, the business reality television show which, in Britain, is fronted by multi-millionaire Sir Alan Sugar. Sugar was given a job in government in last week’s reshuffle and promoted to the peerage.

The latest series, which attracted audiences of more than five million each week, finished its run Sunday. Mona Lewis was the eighth candidate to be kicked off the show by Sugar.

The 28-year-old told the Daily Telegraph: “I’m working for London 2012 now, helping the Olympics’ relationships with small businesses; it’s exciting, and it makes me realize that there’s a lot going on outside the world of The Apprentice.”

U.K. Sport and the British Olympic Association have turned to soccer’s Team England concept to avoid potential conflicts between athletes' individual sponsors and their own commercial interests.

The sports organizations are seeking to raise millions towards the preparation costs of Britain’s 2012 teams, but need to utilize the country’s leading Olympians to appeal to commercial backers.

Contracts delivered to athletes this week will seek their agreement to make appearances for sponsors in return for grants from public funds. The athletes’ interests will be protected by Team 2012 sponsors using a minimum of four athletes from at least three sports in every one of their marketing engagements.

Further avoiding the semblance of personal endorsement from top names such as Chris Hoy or Becky Adlington – something sponsors would crave – will be the stipulated 1:3 ratio of medalists to non-medalists.

LOCOG is already promoting world-class sport in London to Olympic supporters, offering 10 percent off the cost of tickets for the gymnastics world championships. The event will be staged at 2012 venue, the O2 at Greenwich, in October.

London organizers have also started to use YouTube to illustrate the progress being made in the Olympic Park, with LOCOG board member and former Olympic champion Jonathan Edwards fronting a video fly-over of the rapidly changing venues. http://www.youtube.com/watch?v=nVWtT_nN93o