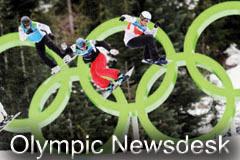 "The most important thing is that we are sure the athletes are very excited because the sport will be in the heart of the Games in 2016. The proximity to the Olympic Village is another positive point to integrate and share experiences," he said Monday in a statement posted to the ITF’s website.

ITF inspectors were in Rio from May 14 to 16 for meetings with members of the Rio 2016 Organizing Committee as well as a tour of the Olympic Tennis Center.

The venue, which is located at the heart of Barra Olympic Park and includes a center court for about 10,000 spectators, will also be used during the Paralympics.

"Anyone who looks at the history of tennis knows that South America has performed, and is performing, an important role in our sport, Margets said.

"We hope the 2016 Games will be a catalyst for Brazilian tennis."

Gonzalez got a sneak peak of the medals during a Project Review of the Games with Sochi 2014 organizers this week.

One feature perhaps inadvertently revealed early is that the medals appear to have a blue neck strap.

The medals will be formally unveiled on May 27.

Brazil celebrated the opening of the Pernambuco Arena in the city of São Lourençoda Mata on Monday, staging a match between two teams of stadium workers.

This marks the opening of the sixth and final stadium that will be used in the 2013 Confederations Cup.

A Memorandum of Cooperation signed by the Russian International Olympic University and Kazakhstan will reinforce Olympic values and benefit youth throughout Kazakhstan.

The RIOU made the announcement Tuesday.

Under the agreement, the two sides will exchange best practices regarding sport development in the central Asian country.

"The development of sport in Kazakhstan requires not only talented coaches and athletes but highly qualified managers who can offer new ideas on developing our sports industry," said Erlan Kozhagapanov Chairman of the Agency for Sport and Physical Culture of the Republic of Kazakhstan.

Two of the most well-known video game rivals are teaming up for Sochi 2014.

In a YouTube announcement, Iwata said players will utilize both the Wii Remote Plus controller and Wii U GamePad throughout five events featured in the game: biathlon, bobsledding, curling, figure skating, skiing and snowboarding. Skeleton, luge and ice hockey are the Winter Olympic sports not included.

The game’s release will be announced soon.

Around the Rings will produce another special edition magazine for the ANOC Extraordinary General Assembly in Lausanne on June 15. Don't miss this opportunity to reach the world's 200+ National Olympic Committees. Contact ATR Partnership Development Director Brian Baker for details. brian@aroundtherings.com