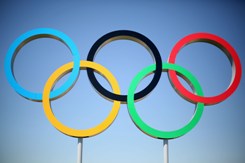 ahead of the London Olympic Games on July 23, 2012 in London, England.

Two-time Olympic gold medalist and NBA superstar Kobe Bryant leads the IOC’s promotion efforts for Olympic Day. In a YouTube message, Bryant says: "I can’t run, I can’t jump and I can’t swim yet. So I need you guys to pick up the slack for me and be doubly active."

Introduced in 1948, Olympic Day commemorates the founding of the IOC on June 23, 1894 and, in the IOC’s words, hopes to encourage activity. Traditionally, Olympic Day is celebrated with fun runs.

At IOC Headquarters in Lausanne, President Jacques Rogge will oversee events on June 24.

In addition to global activities organized by the majority of the 204 NOCs, the IOC is encouraging its fans to participate in a photo contest.

Each participant will upload a photo of his/herself ‘getting active’ on Olympic Day to the Olympic Day contest page: https://apps.facebook.com/olympicgamesapp/contest?id=1575.

The winner will receive the opportunity to attend the inauguration of the new Olympic Museum in Lausanne, next October.

Throughout the world, National Olympic Committees are hosting a variety of events for Olympic day. Here is a selection of the events.

Australian Olympic Committee education manager Frances Cordaro tells Around the Rings, Olympic Day will be marked with Olympians visiting their primary schools to talk about "the importance of education and highlight the positive impact sport has had on their life." Cordaro added the Olympians include London team members, Sochi hopefuls "and the Golden Girl of the 1956 Melbourne Games, seventy-five year old Betty Cuthbert."

The Bahrain Olympic Committee is hosting a marathon on June 23 at Dohat Arad Walkway in Muharraq.

Around 10,000 school children ‘got active’ in honor of Olympic Day in Germany on June 14. Youngsters tried out new sports such as handball, rowing, judo, trampoline and fencing at the Kassel Sports Festival. German Olympians helped the children in their activities.

The Japanese Olympic Committee is organizing an Olympic Concert on Olympic Day. In downtown Tokyo, an "illumination event" is also scheduled to take place.

The Mexican National Olympic Committee, in conjunction with McDonald’s Mexico, will host four races for children at the Mexican Olympic Sports Center on Saturday. Around 100 participants from the country will also attend.

The Nepal Olympic Committee marked Olympic Day with a nine-day celebration beginning June 15. In all, the celebration will consist of 23 different events. A special event will be organized at the Jawalakhel Ground on Sunday, according to local media.

Turkey has a special Olympic Day this year, hosting both the Mediterranean Games and the FIFA U-20 World Cup. The Turkish National Olympic Committee began its Olympic Day celebration at the beginning ofJune with a day of sporting events across the country, and an Olympic Day Run.

An Olympic Day celebration started on May 25 in Ukraine, as part of the Centennial Celebration of the Olympic movement in Ukraine. More than 3,000 people took part in a run at the Ukrainian main street Khreschatyk in Kyiv. Participants visited 23 sport grounds meeting Olympians along the way. The celebration also showcased a flash mob and numerous kids’ competitions. Festivities will continue throughout all 27 regions of Ukraine.

The United States Olympic Committee (USOC) will host 715 events 558 cities nationwide through June 30. More than 300 U.S. athletes will make appearances throughout the Olympic Day festivities."The USOC is proud to take part and grow this global celebration by spreading the fundamentals of Olympism throughout the United States," said USOC CEO Scott Blackmun.

All six IOC presidential candidates stressed the importance of Olympic Day. The statements from the candidates to Around the Rings are listed below.

Thomas Bach: "The power of the Olympic movement is that its values and its rules are recognized universally. It is the IOC’s mission to safeguard and to spread these values to new generations and the Olympic Day is a great chance to do this."

Richard Carrion: "The Olympic Movement has been increasingly broad and expansive for more than a century," But Olympic Day seems to carry such a force in today’s world, where social-media tools have the ability to turn an Olympic run into a global phenomenon of physical activity."

Ser Miang Ng: "Olympic Day is a fantastic platform to promote Olympic values all over the world, a universal event that transcends age, gender, sport ability and background."

Denis Oswald: "The Olympic Day reminds the world of the fundamental values which are incorporated in sport and in the Olympic Games."

C.K. Wu: "It is crucial for the Olympic Movement to keep on sharing its core values: Sport, Culture and Education and I strongly believe that the Olympic Day is all about this: bringing the spirit of Olympism to the widest possible audience, especially the youngest generations."

Olympic sponsor Omega unveils a countdown clock to the 2014 and 2016 Olympic Games in Lausanne.