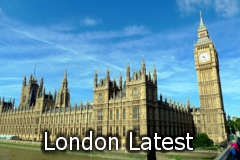 "I certainly think we have the capability without a doubt," she told ATR.

"There's never been so much emphasis on structures and funding, bringing teams together and being very professionalized in their approach."

Holmes was less bullish about Team GB's track and field medal hopes. UK Athletics head coach Charles Van Commenee has set a target of eight medals. She said that was "a good target to have. I'll stick to it."

With only five weeks to the Olympics, excitement is building for the Games across the U.K.

Holmes said she was "looking forward to seeing some great achievements and successes from the British team."

She added: "I think what the Games is going to bring and be remembered by is the impact on people [spectators]. People will remember it from different perspectives like the Live Sites. The energy, enthusiasm and excitement are what the Games bring and will help leave lasting memories."

London mayor Boris Johnson is seeking to prevent a strike over pay by around 20,000 London bus workers.

Bus chiefs and the Unite union were meeting Thursday in a bid to avoid industrial action.

The Olympic Delivery Authority offered $13 million in a bid to head off the strike planned for Friday. Unite union members are asking for a $784 bonus to pay for extra work during the Games. Unite expects 800,000 extra passengers to use London buses in that period.

The ODA has already given Transport for London more than $100 million to fund additional services during the Olympics. Bonus pay deals have been hammered out with, among others, workers at Network Rail and London Underground.

The London 2012 Festival kicks off Thursday with five headline events taking place across the U.K. More than 130 events will be staged throughout Britain on the opening weekend alone.

More than 25,000 artists from all 204 Olympic and Paralympic countries will take part in the 12-week festival, intended to showcase the world’s best in music, theatre, dance, visual art, literature, film and fashion.

Events and performances will take place at 900 venues across the U.K.

The five events to open the festival are staged in Stirling, Derry-Londonderry, South Wales, the Lake District and Birmingham. They include a concert with superstar conductor Gustavo Dudamel and the Simón Bolívar Symphony Orchestra of Venezuela; an outdoor show by French street arts company Les Commandos Percu by Lake Windermere in Cumbria; and the unveiling of artist Jeremy Deller’s life-size inflatable replica of Stonehenge, titled "Sacrilege", in Carmarthen, Wales.

Andy Murray is the first tennis player to be selected for Team GB.

Taking part in men’s singles, he has vowed to doall he can to banish the memory of Beijing 2008, where he crashed out to the world No.74 in the first round.

"I can't wait for the Olympics to start, it's such an incredible event and for it to be in London is extra special," said the 25-year-old Scotsman, who is ranked fourth in the world.

"I remember being part of the Olympic Ceremony in Beijing, which was an unbelievable atmosphere and like nothing I'd experienced before. Winning a medal this summer for Team GB is one of my major goals."

Murray admitted that a Grand Slam was more prestigious than a gold medal but told BBC Sport that "in general, to the whole world, a gold medal is the pinnacle of sport."

In Beijing, only Murray and his brother Jamie represented Team GB.

The International Tennis Federation will announce the wildcard entries to the Olympic competition on June 28. Following this, the BOA will announce any further athletes selected to Team GB's tennis squad.

Rafael Nadal will serve as Spain’s flagbearer in London.

"For me the chance to carry the flag representing all the Spanish athletes in London is a true honor," Nadal said in a statement. "I think carrying the flag will be one of the most moving moments of my entire career.

"I can only say thanks and wish my fellow athletes the best of luck."

Nadal is the reigning gold medalist in tennis and has two victories at Wimbledon – site of tennis for the Olympics.

England and Manchester United legend Bobby Charlton will carry the Olympic flame past Old Trafford on Sunday on day 37 of the Olympic torch relay.

Charlton, 74, helped England to lift the FIFA World Cup trophy in 1966 and is a revered figure in the global game. One of 14 torchbearers on Sunday, he will carry the flame from Water's Reach to Old Trafford, which is playing a key role in London 2012 as a host venue for the football tournament.

On day 34 of its journey to the London Games, the Olympic Torch will travel 122 miles from Dumfries to Bowness-on-Windermere.

The 114 torchbearers of the day will carry the Flame by open-top bus and steam boat as it visits historic landmarks such as the statue of poet Robert Burns.

Eurostar announced it will carry the French Paralympic team to the Paralympics.

A statement from the rail line said it will specially outfit a chartered train for "the majority" of the team on August 25 and September 10.

"We are delighted to establish this partnership with Eurostar, which will undoubtedly help our Paralympic team achieve their sporting ambitions," Gérard Masson, president of the French National Paralympic Committee, said. "This special adapted Eurostar train will invaluably allow our team to travel to London together, quickly and comfortably."