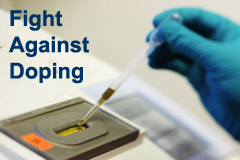 The WADA Executive Committee had a busy weekend, approving a new list of banned substances and a way to ensure privacy is protected, as well as an anti-doping lab in India. The committee met Sept. 20 in Montreal.

"The fight against doping is a 24-7-365 responsibility," WADA president John Fahey said.

"I am pleased that despite significant progress in the fight against doping in the past few years and months, stakeholders recognize the need to take further measures to protect the health of athletes and the integrity of sport worldwide."

“Refining the list is an important responsibility in WADA’s work and one of the key tools in the harmonization of the global fight against doping in sport,” said Fahey.

The Executive Committee also approved the new International Standard for the Protection of Privacy and Personal Information, which will also go into effect on January 1.

The new standard ensures a minimum standard of security for private information and data collected during the process of testing for drugs.

The WADA Executive Committee also approved The National Dope Testing Laboratory in New Delhi, saying the lab met WADA’s requirements to be a certified anti-doping laboratory. The NDTL is the 34th lab worldwide to be accredited by WADA.

Speaking after the WADA Executive Committee meeting, WADA chief John Fahey praised the system of pre-Olympic drug tests. Fahey said the tests were the reason so few athletes were caught doping during the Games.

"I think that in itself was very effective, and I do believe that the deterrent factor in the context of cheats wanting to take the risk was a very strong message that was out there," Fahey said. "If you go back to those months leading up to the games a number of nations had a very vigorous program at home, and the USA was one, I know."

"I'm not sure if the numbers have been released on those few months but I can assure you that it was quite a large number," Fahey said. "It was 11 in Russia, almost the entire Greek weightlifting team, and so on and so forth. Those numbers were significant. I think that was a message that continued to resonate and I hope and believe that it served as a deterrent factor to those who believed that they could hop on the plane, get there and get away with it."

Hurdler Has Day in Court

Halkia,29, maintained her innocence saying it was "the one thing that is for sure. I know that better than anyone."

The prosecutor leading the case is attempting to find out if Halkia, her coach, or another Greek sprinter who tested positive for the drug, broke Greek law in obtaining and using the substance.

The IOC gave the Belarusians until October 17 to provide more information on their case.

"We are waiting and we hope," silver medalist Devyatovskiy said through an interpreter. "We know that we are clean but we are waiting for information."

The duo could lose their medals if found guilty.

Serocznski’s ruling will be announced on October 8. He finished fourth in the double kayak 1000m.

Mythilus was tested on August 19 and found to have the anti-inflammatory drug Felbinac in its system.

King claimed the drug must have entered her horse’s system when it was being treated for a condition upon arrival in Hong Kong. The FEI panel reviewing King’s case noted her "impeccable record and reputation, and her cooperation in the investigation", but found no basis for her assertions.

"While elaborate, the explanations furnished by King were only speculations," the FEI said.

King’s one month suspension from the date of the test means she is now eligible to compete again, but she was ordered to repay costs and fined as punishment. In accordance with the FEI’s ruling, the two other members of the US dressage team were disqualified.