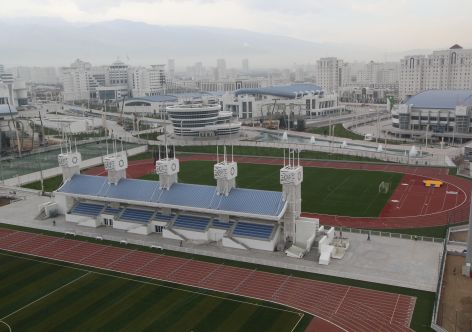 In 2017, Turkmenistan’s capital Ashgabat will host the 5th Asian Indoor and Martial Arts Games (AIMAG 2017). No expense is being spared on the creation of the state-of-the-art Olympic Complex.

Turkmenistan was awarded the 5th Asian and Indoor Martial Arts Games in Kuwait in December 2010 and since that time the AIMAG 2017 Executive Committee, which is made up of experts from the Olympic Council of Asia and international specialists, has been highly active. They have made regular trips to meetings at the OCA Headquarters in Kuwait and to major sporting events such as the Glasgow 2014 Commonwealth Games, to enrich the Committee’s knowledge of hosting major sporting events. Mr Dayanch Gulgeldiev, Chairman of the AIMAG 2017 Executive Committee, has often spoken about the great honour that Turkmenistan feels about hosting the Games. "As the first country in the Central Asian region to host this great event, we feel very proud and are dedicated to ensuring the delivery of a world-class Games". The Committee are also running regular forums and exhibitions, which invite the international media and businesses to Turkmenistan as a way to build long-term relationships and promote the preparations of AIMAG 2017. Gulgeldiev added "it is important to welcome the world to Ashgabat and share our visions and plans for AIMAG 2017 and the future of sport in Turkmenistan".

With preparations at an already impressive stage for the Games, a number of key figures in the Olympic family have travelled to Turkmenistan to see the progress for themselves, including OCA Life Honorary Vice President - Wei Jizhong and Director of the Asian Games Department - Haider Farman. In February 2015, the Coordination Committee of the Olympic Council of Asia (OCA) visited Ashgabat to discuss the next steps in preparing for AIMAG 2017. This meeting was an opportunity for the Executive Committee to share their legacy plans for the sports facilities and discuss the training programme for Games-time volunteers and the installation of high-speed internet services. Also discussed was the upcoming OCA General Assembly, which will be hosted in Ashgabat in September 2015.

February also saw a visit from Turkmenistan’s President – His Excellency President Gurbanguly Berdimuhamedov - to see the progress made on construction and to discuss the facilities with construction company Polimeks’ CEO, Erol Tabanca. During the tour, the President emphasised the importance of ensuring that the design of the Complex continued to blend with the architecture of the city and that, while construction must continue at a fast pace, the highest standard must be ensured at each venue for competing athletes in 2017. When asked about the Olympic Village Guldeldiev said "construction is going very well, we are ahead of schedule with the developments of phases two and three, we were pleased to announce in February that 30% of the monorail (which will cover the full length of the Complex) has already been built. I am delighted with the preparations so far".

Over the next two years, as developments continue to progress, more and more people are being invited to visit the incredible facilities and to share their expertise with Turkmenistan ahead of the Games. The next event will take place between 2-4 April, when the AIMAG 2017 Executive Committee will be welcoming media and broadcasters from around the world to attend the second edition of the Turkmenistan International Sports Media Forum. They will be amongst some of the first international media to take a private tour of the Complex and to hear more about the country’s sporting plans for the future, as well as attend debates and discussions on hosting major sporting events in the 21st Century.

It is without question that Turkmenistan will soon be the proud owner of one of the largest and most impressive sport complexes in the world; and although this is the first major sporting event that the country has hosted, it is already thinking ahead to bigger events. Gulgeldiev confirmed that "discussions are already taking place about Turkmenistan bidding for other major sporting events. AIMAG 2017 is just the first step for us - His Excellency the President is passionate about sport and we have long term goals to hold many more sporting events."